Drones land back to Earth at Xponential 2017

JD Claridge’s story epitomizes the current state of the drone industry. Claridge, founder of xCraft, is best known for being the first contestant on Shark Tank to receive money from all the Sharks – even Kevin O’Leary! Walking the floor of Xponential 2017, the annual convention of the Association for Unmanned Vehicle Systems Integration (AUVSI), Claridge remarked to me how the drone industry has grown up since his TV appearance.

Claridge has gone from pitching cellphone cases that turn into drones (aka phonedrone) to solving mission critical problems. The age of fully autonomous flight is near and the drone industry is finally recovering from the hangover of overhyped Kickstarter videos (see Lily drone’s $34 million fraud). xCraft’s pivot to lightweight, power efficient, enterprise drones is an example of this evolved marketplace. During the three days of Xponential 2017, several far-reaching announcements were made between stalwarts of the tech industry and aviation startups. Claridge introduced me to his new partner, Rajant, which is a leader in industrial wireless networks. xCraft’s latest models utilize Rajant’s mesh networks to launch swarms of drones with one controller. More drones flying simultaneously enables users to maximize the flight time limitations of lithium batteries by covering greater areas within a single mission.

The battery has been the Achilles heel of the small drone industry since inception. While large winged craft relies heavily on fossil fuels, multirotor battery-operated drones have been plagued with shorter missions of under 45 minutes. Innovators like Claridge are leading the way for a new wave of creative solutions:

Airbus showcased its Zephyr drone products or HAPS (High Altitude Pseudo-Satellite) UAVs using solar-winged craft for power. Zephyr UAVs can fly for months at a time, saving thousands of tons of fuel. The HAPS also offers a number of lightweight payload options from voice communications to persistent internet to real-time surveillance. Airbus was not the only solar solution on display; there were a handful of Chinese upstarts and solar cell purveyors for retrofitting existing aircrafts. 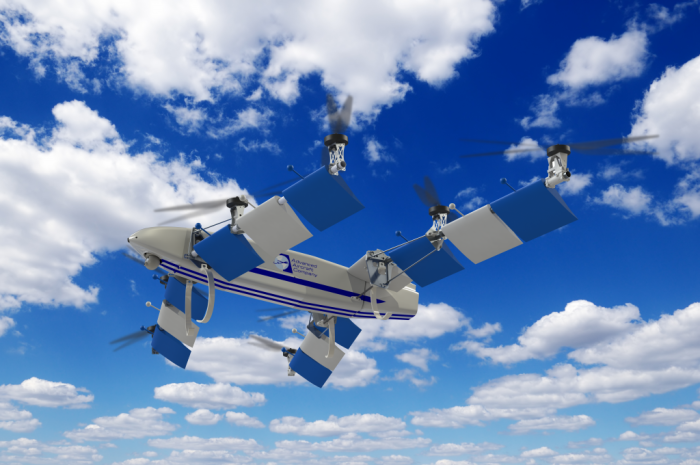 In the Startup Pavilion, William Fredericks of the Advanced Aircraft Company (AAC) demoed a novel technology using a hybrid of diesel fuel and lithium batteries with flexible fixed wings and multirotors, resulting in over 3 hours of flying time. AAC’s prototype, the Hercules (above) is remarkably lightweight and fast. Fredricks is an aircraft designer by trade with 12 designs flying in the air, including NASA’s Greased Lightning that looks remarkably similar to Boeing’s Osprey. The Hercules is available for sale on the company’s website for multiple use cases, including: agricultural, first responders, and package delivery. It is interesting to note that a few rows from Frederick’s booth was his former employer, NASA, promoting their new Autonomy Incubator for “intelligent flight systems” and its “autonomy innovation lab,” (definitely an incubator to watch).

In addition to hybrid fuel strategies, entrepreneurs are also rethinking the launch procedures. AAC’s Hercules and XCraft’s commercial line of drones vertically takeoff to reduce wind resistance and maximize energy consumption. Australian Startup Iridium Dynamics takes this approach to a new level with astonishing results. Its winged craft, Halo, uses a patent-pending “hover thrust” of its entire craft so its wings actually create the vertical lift to hover with minimal power. The drone also has two rotors to fly horizontally. According to Dion Gonano, Control Systems Engineer, it can fly for over 2 hours. The Halo also lands vertically into a stationary mechanical arm. While the website lists a number of commercial applications for this technology, it was unclear in my discussions with Gonano if they have deployed this technology in real tests.

Prior to Xponential, Seattle-based WiBotic announced the closing of its $2.5 seed round to fund its next generation of battery charging technologies. The company has created a novel approach to wireless inductive charging for robotics. Its wireless inductive charging platform includes a patent-pending auto detect feature that can begin recharging once the robot enters the proximity of the base station, even during flight. According to Dr. Ben Waters, (CEO), its charge is faster than traditional solutions presently on the market. Dr. Waters demonstrated for me its suite of software tools that monitor battery performance, providing clients with a complete power management analytics platform. WiBotic is already piloting its technology with leading commercial customers in the energy and security sectors. WiBotic is the first inductive charging platform; other companies have created innovating battery-swapping techniques. Airobotics unique drone storage box that is deployed currently at power plants in Israel, includes a robotic arm, housed inside, that services the robot post flight by switching out the payload and battery:

In addition to aircraft design, payload weight is a big factor of battery drain. A growing trend within the industry is miniaturizing the size and cost of the components. Ultimately, the mission of a drone is directly related to the type of payload from cameras for collecting images to precise measurements using Light Detection and Ranging sensors (or Lidar). Lidar is typically deployed in autonomous vehicles to provide the most precise position for the robot in a crowded area, like a self-driving car on the road. However, Lidar is currently extremely expensive and large for many multirotor surveys. Chris Brown of Z-Senz, a former scientist with the The National Institute of Standards and Technology (NIST), hopes to change the landscape of drones with his miniaturized Lidar sensor. Brown’s reduced sensor, SKY1, offers major advantages for size, weight, and power consumption without losing accuracy of high distance sensing. A recent study estimates the Lidar market is expected to exceed $5 billion by 2022, with Velodyne and Quanergy already gaining significant investment. Z-Senz is aiming to be commercially available by 2018. 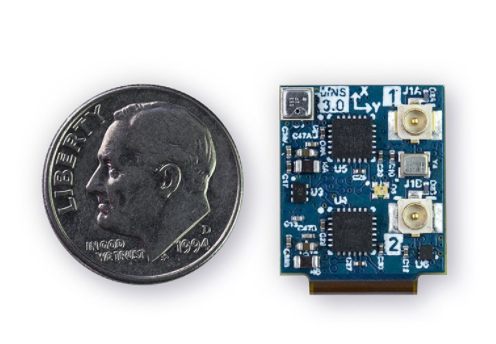 Lidar is not the only measuring methodology, Global Positioning Solutions (GPS) have been deployed widely. Two of the finalists of the Xponetial Startup Showdown were startups focused on reducing GPS chip sizes and increasing functionality. Inertial Sense has produced a chip the size of a dime that is capable of housing an Inertial Measurement Unit (IMU), Attitude Heading Reference System (AHRS), and GPS-aided Inertial Navigation System (INS). Their website claims that their “advanced algorithms fuse output from MEMs inertial sensors, magnetometers, barometric pressure, and a high-sensitivity GPS (GNSS) receiver to deliver fast, accurate, and reliable attitude, velocity, and position even in the most dynamic environments.” The chips and micro navigation accessories are available on the company’s e-store.

The winner of the Showdown, uAvionix, is a leading developer of avionics for both manned and unmanned flight. Their new transceivers and transponders claim to be “the smallest, and lightest and most affordable on the market” (already GPS is a commodity). uAvionix presented its “Ping Network System that reduces weight on average by 40% as compared to the two-piece installations.” The Ping products also claim barometric altitude precision with accuracy beyond 80,000 ft. 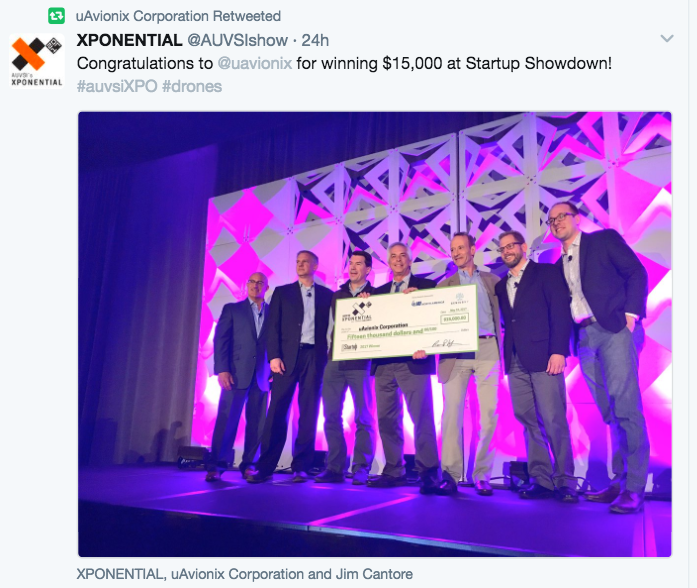 As I rushed to the airport to catch my manned flight, I felt reenergized about the drone industry, although follies will persist. I mean who wouldn’t want a pool deckchair drone this summer? 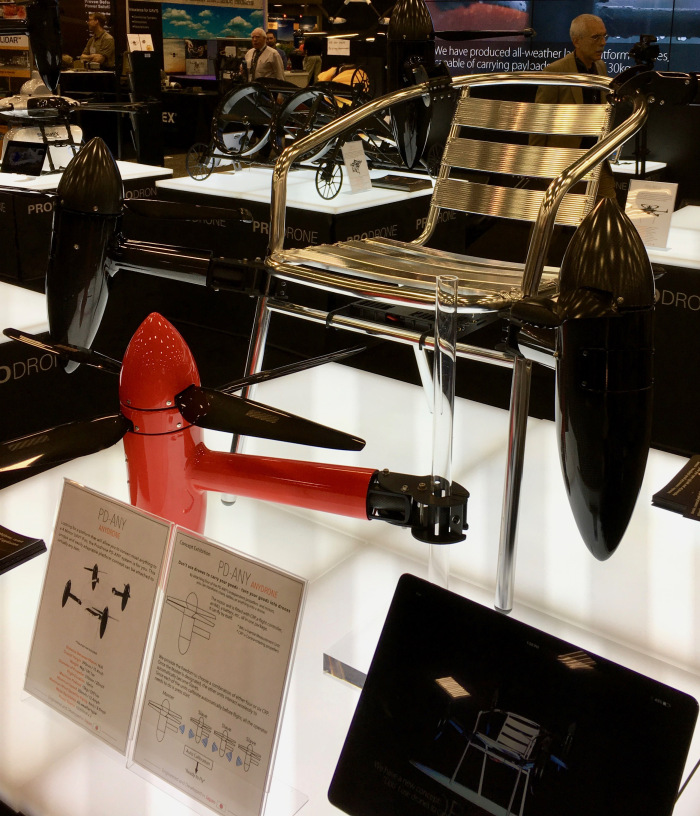 This and all other autonomous subjects will be explored at RobotLabNYC’s next event with Dr. Howard Morgan (FirstRound Capital) and Tom Ryden (MassRobotics) – RSVP.