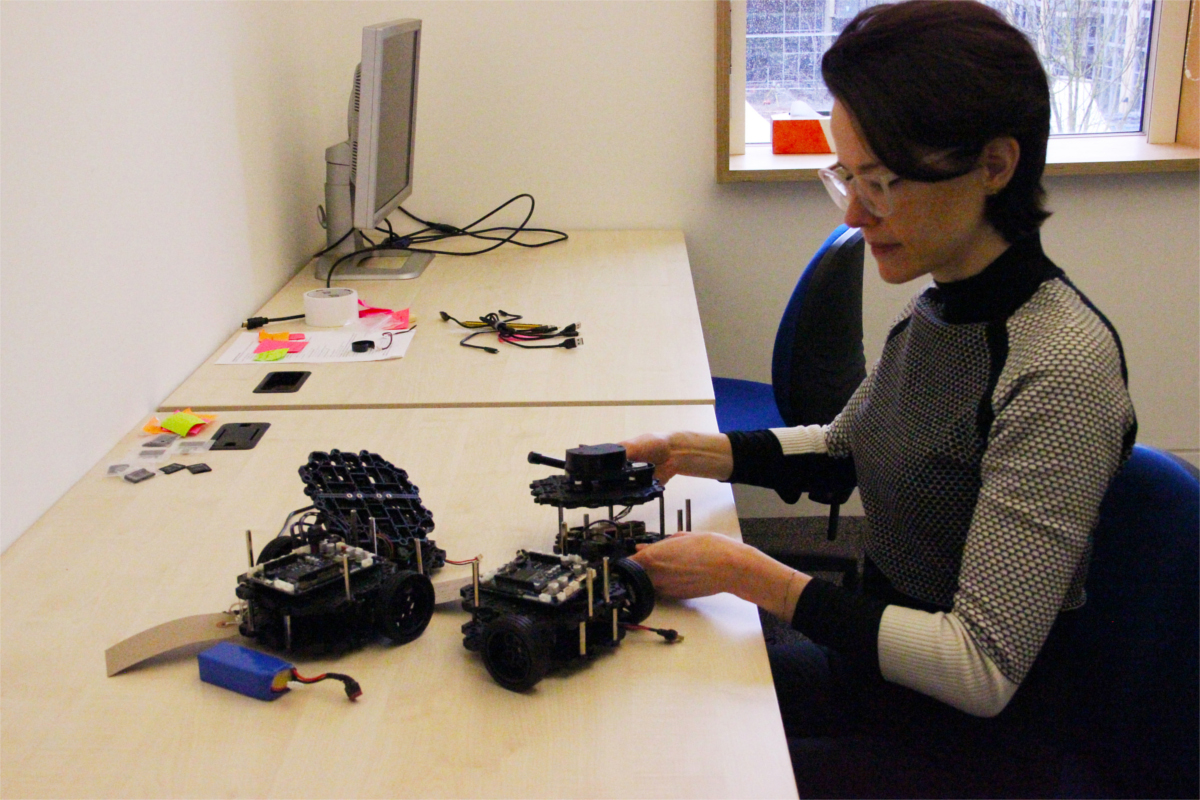 In this technical talk, Amanda Prorok, Assistant Professor in the Department of Computer Science and Technology at Cambridge University, and a Fellow of Pembroke College, discusses her team’s latest research on what, how and when information needs to be shared among agents that aim to solve cooperative tasks.

Effective communication is key to successful multi-agent coordination. Yet it is far from obvious what, how and when information needs to be shared among agents that aim to solve cooperative tasks. In this talk, I discuss our recent work on using Graph Neural Networks (GNNs) to solve multi-agent coordination problems. In my first case-study, I show how we use GNNs to find a decentralized solution to the multi-agent path finding problem, which is known to be NP-hard. I demonstrate how our policy is able to achieve near-optimal performance, at a fraction of the real-time computational cost. Secondly, I show how GNN-based reinforcement learning can be leveraged to learn inter-agent communication policies. In this case-study, I demonstrate how non-shared optimization objectives can lead to adversarial communication strategies. Finally, I address the challenge of learning robust communication policies, enabling a multi-agent system to maintain high performance in the presence of anonymous non-cooperative agents that communicate faulty, misleading or manipulative information.

Amanda Prorok is an Assistant Professor in the Department of Computer Science and Technology, at Cambridge University, UK, and a Fellow of Pembroke College. Her mission is to find new ways of coordinating artificially intelligent agents (e.g., robots, vehicles, machines) to achieve common goals in shared physical and virtual spaces. Amanda Prorok has been honored by an ERC Starting Grant, an Amazon Research Award, an EPSRC New Investigator Award, an Isaac Newton Trust Early Career Award, and the Asea Brown Boveri (ABB) Award for the best thesis at EPFL in Computer Science. Further awards include Best Paper at DARS 2018, Finalist for Best Multi-Robot Systems Paper at ICRA 2017, Best Paper at BICT 2015, and MIT Rising Stars 2015. She serves as Associate Editor for IEEE Robotics and Automation Letters (R-AL), and Associate Editor for Autonomous Robots (AURO). Prior to joining Cambridge, Amanda Prorok was a postdoctoral researcher at the General Robotics, Automation, Sensing and Perception (GRASP) Laboratory at the University of Pennsylvania, USA. She completed her PhD at EPFL, Switzerland.

The next technical talk will be delivered by Koushil Sreenath from UC Berkeley, and it will take place on April 23 at 3pm EDT. Keep up to date on this website.

16.04.2021
Our recent discussions with key players in the field confirm that MRO’s operations will increase significantly in late 2021 or 2022. How will maintenance centres efficiently restart their operations? What impact can technology have in this recovery?
15.04.2021
Despite artificial intelligence and robotics adapting to many other areas of life and the work force, construction has long remained dominated by humans in neon caps and vests. Now, the robotics company Baubot has developed a Printstones robot, which they hope to supplement human construction workers onsite.
15.04.2021
Following Grabit’s inception in 2013, Nike Inc. made an investment in the company and later became one of the first customers to buy its materials handling robot system, Stackit. Using Stackit, Nike can manufacture 600 pairs of shoes in just one eight-hour shift.
15.04.2021

Since 2007, two professors at the TU Delft have been researching ways to harvest energy from the wind using a kite. The robotic kite looks set to make its debut in the energy sector, but often inventions are used in unexpected ways. In this series of articles, we take robot innovations from their test-lab and bring them to a randomly selected workplace in the outside world. From kindergarten teacher Fransien, we learn that big kites could also be child’s play, quite literally.

A robot wheels in the kite and then slowly releases it, painting 8-shaped loops on the sky. As this happens, the motion of the unwinding rope generates electricity. This innovative solution harmonises power generation with the flows of the atmosphere. Kitepower uses wind to provide us with energy, but rather than simply sticking a big fan in the air and waiting for air flows to come and go, it latches on to the wind and stays with it.

Professor Schmehl explains his research: “We explored the idea of wind energy through the use of robotically engineered kites”. The result is a big sail floating high up in the air with a small unit that automatically steers, controls the pulling force and connects to the ground station. This ground station senses when to reel in the kite to convert a maximum of motion – or kinetic energy –  into electricity. Using only the vital parts of a wind-turbine, KitePower is cheaper to make, less noisy and more durable than traditional windmills.

KitePower is the company founded to bring this product to market. In England, the idea is to build kite stations in the sea, but in the Netherlands, KitePower is looking to launch them on solid land. The technical challenge now is to get fly the kite above a certain altitude and make its flight autonomous so the system can work without human interaction.  While this technology is being optimised, we were wondering: could there be a different, totally unexpected way of using this technology?

To explore this, we took Kitepower to Fransien Godeke, a kindergarten teacher in the Bilt. She has been educating four to six year-old children for 36 years. Her understanding of how kids grow and learn is incredible, and we were curious how Fransien would use this robot innovation in the context of her work.

Copied by a six-year old

“We once tried to build our own mini-parachutes in class, maybe we could make this as well?”, is her first thought. Fransien tells me that children learn most through playing and making things themselves. A re-engineering process would allow them to experience what is needed to keep a kite like this floating in the wind, without any help. She says: “We could use straws to make the shape, pull through little cords and find very thin paper to lift the entire toy in the air.”

Children also love pretending to be something they’re not. “Kitepower looks like it has a futuristic dragon skin”, Fransien fantasises. With a kite this large, the kids could transform into a ten meter long dragon. They could jump and run around and show of to other kids. Or build a big hut to shelter in and maybe also become a train. In short, she imagines that kids would make anything they want with this versatile piece of kite fabric created by Professor Schmehl and his colleagues.

If the class would get access to a real Kitepower kite, we could try to get it up in the air together says Fransien: “Children somehow have the impulse to start running when they want to get something airborne. Perhaps this robot could show them how speed translates to lift and power”.

A theatrical flying dragon show for entertaining people in nature that also generates green dragon energy. How cool is that as a spectacle?

Finally, we come to the question whether childer would be clever enough to understand the concept of Kitepower. Fransien says: “If you show them the physics, they will understand it”. To illustrate how fast Fransien’s kids learn, she tells me her toddlers already code their own programs: “They get a little matrix, I tell them where the little robot – called Bbot – should go and they program it within minutes”.

KitePower is being developed to solve the world’s energy crisis, but in the kindergarten it becomes a wonderful tool for irreverent experimentation by the world’s youngest engineers. Just imagining what children would do with Kitepower, already opens up exciting new avenues that we didn’t see before. A theatrical flying dragon show for entertaining people in nature that also generates green dragon energy: how cool is that as a spectacle?

The post Robots flying a kite to generate electricity. What if you would use this? appeared first on RoboValley.

14.04.2021
The challenge for many companies is how to consistently maintain a safe workplace without creating barriers to productivity or innovation. Enter autonomous mobile robots (AMRs).
14.04.2021
Carnegie Mellon University's acclaimed snake-like robot can now slither its way underwater, allowing the modular robotics platform to inspect ships, submarines and infrastructure for damage.
13.04.2021
A team of researchers at the University of California, Berkeley, has built a two-legged robot with t he ability to teach itself to walk using reinforcement learning. The team has written a paper describing their work and has uploaded it to the arXiv preprint server.
13.04.2021
In this webinar we will look at how integrating robotics into the working world means that both cobots and autonomous systems will be important differentiators for production, processes, and innovation.
13.04.2021
Waypoint Robotics/Productive Robotics omnidirectional 7 DoF mobile manipulator combines the easiest to use, most capable omnidirectional autonomous mobile robot with the simplest and most flexible 7 axis collaborative robot arm. The Vector AMR’s omnidirectional mobility enables fast, precise docking in any direction or orientation so the OB7 can perform accurate and precise grasping or picking tasks, taking full advantage of the cobots’ 7 degrees of freedom (7 DoF) and superior dexterity. It can be powered using Waypoint’s EnZone wireless charger that provides on-demand energy and opportunity charging for longer run times. Workers can use this mobile platform to perform repetitive tasks such as machine tending, quality assurance sampling, material replenishment, packaging, and many others, so they can focus on the high skilled jobs for which they are uniquely qualified. It has never been easier or more cost effective to deploy a mobile manipulator for manufacturing and logistics applications.
Page 1 of 257
1 2 3 … 257 Next »