Page 1 of 4
1 2 3 4 Next »
31.08.2020
During the current coronavirus pandemic, one of the riskiest parts of a health care worker's job is assessing people who have symptoms of COVID-19. Researchers from MIT and Brigham and Women's Hospital hope to reduce that risk by using robots to remotely measure patients' vital signs.
31.08.2020
Bright Spot: leading economic forecaster provides optimist outlook for overall economy moving into 2021
28.08.2020
Can a robot have feelings? Some robots are programmed to show emotion, from online artificial intelligence (AI) chatbot assistants to Sophia the social humanoid robot who can give emotional responses in a conversation.
28.08.2020
It wasn't long after Hurricane Laura hit the Gulf Coast Thursday that people began flying drones to record the damage and posting videos on social media. Those videos are a precious resource, say researchers at Carnegie Mellon University, who are working on ways to use them for rapid damage assessment.
27.08.2020
Integration is about adding value for customers by designing products that include multiple parts of the solution into a single instrument. For motion control hardware, this can mean combining the mechanics along with a motor, encoder, limit sensor, driver, and controller.
27.08.2020

Minimally invasive laparoscopic surgery, in which a surgeon uses tools and a tiny camera inserted into small incisions to perform operations, has made surgical procedures safer for both patients and doctors over the last half-century. Recently, surgical robots have started to appear in operating rooms to further assist surgeons by allowing them to manipulate multiple tools at once with greater precision, flexibility, and control than is possible with traditional techniques. However, these robotic systems are extremely large, often taking up an entire room, and their tools can be much larger than the delicate tissues and structures on which they operate.

A collaboration between Wyss Associate Faculty member Robert Wood, Ph.D. and Robotics Engineer Hiroyuki Suzuki of Sony Corporation has brought surgical robotics down to the microscale by creating a new, origami-inspired miniature remote center of motion manipulator (the “mini-RCM”). The robot is the size of a tennis ball, weighs about as much as a penny, and successfully performed a difficult mock surgical task, as described in a recent issue of Nature Machine Intelligence.

“The Wood lab’s unique technical capabilities for making micro-robots have led to a number of impressive inventions over the last few years, and I was convinced that it also had the potential to make a breakthrough in the field of medical manipulators as well,” said Suzuki, who began working with Wood on the mini-RCM in 2018 as part of a Harvard-Sony collaboration. “This project has been a great success.”

A mini robot for micro tasks

To create their miniature surgical robot, Suzuki and Wood turned to the Pop-Up MEMS manufacturing technique developed in Wood’s lab, in which materials are deposited on top of each other in layers that are bonded together, then laser-cut in a specific pattern that allows the desired three-dimensional shape to “pop up,” as in a children’s pop-up picture book. This technique greatly simplifies the mass-production of small, complex structures that would otherwise have to be painstakingly constructed by hand.

The mini-LAs are themselves marvels in miniature, built around a piezoelectric ceramic material that changes shape when an electrical field is applied. The shape change pushes the mini-LA’s “runner unit” along its “rail unit” like a train on train tracks, and that linear motion is harnessed to move the robot. Because piezoelectric materials inherently deform as they change shape, the team also integrated LED-based optical sensors into the mini-LA to detect and correct any deviations from the desired movement, such as those caused by hand tremors.

Steadier than a surgeon’s hands

To mimic the conditions of a teleoperated surgery, the team connected the mini-RCM to a Phantom Omni device, which manipulated the mini-RCM in response to the movements of a user’s hand controlling a pen-like tool. Their first test evaluated a human’s ability to trace a tiny square smaller than the tip of a ballpoint pen, looking through a microscope and either tracing it by hand, or tracing it using the mini-RCM. The mini-RCM tests dramatically improved user accuracy, reducing error by 68% compared to manual operation – an especially important quality given the precision required to repair small and delicate structures in the human body.

After the mini-RCM’s success on the tracing test, the researchers then created a mock version of a surgical procedure called retinal vein cannulation, in which a surgeon must carefully insert a needle through the eye to inject therapeutics into the tiny veins at the back of the eyeball. They fabricated a silicone tube the same size as the retinal vein (about twice the thickness of a human hair), and successfully punctured it with a needle attached to the end of the mini-RCM without causing local damage or disruption.

In addition to its efficacy in performing delicate surgical maneuvers, the mini-RCM’s small size provides another important benefit: it is easy to set up and install and, in the case of a complication or electrical outage, the robot can be easily removed from a patient’s body by hand.

“The Pop-Up MEMS method is proving to be a valuable approach in a number of areas that require small yet sophisticated machines, and it was very satisfying to know that it has the potential to improve the safety and efficiency of surgeries to make them even less invasive for patients,” said Wood, who is also the Charles River Professor of Engineering and Applied Sciences at Harvard’s John A. Paulson School of Engineering and Applied Sciences (SEAS).

The researchers aim to increase the force of the robot’s actuators to cover the maximum forces experienced during an operation, and improve its positioning precision. They are also investigating using a laser with a shorter pulse during the machining process, to improve the mini-LAs’ sensing resolution.

“This unique collaboration between the Wood lab and Sony illustrates the benefits that can arise from combining the real-world focus of industry with the innovative spirit of academia, and we look forward to seeing the impact this work will have on surgical robotics in the near future,” said Wyss Institute Founding Director Don Ingber, M.D., Ph.D., who is also the the Judah Folkman Professor of Vascular Biology at Harvard Medical School and Boston Children’s Hospital, and Professor of Bioengineering at SEAS.

26.08.2020
A Cornell University-led collaboration has created the first microscopic robots that incorporate semiconductor components, allowing them to be controlled—and made to walk—with standard electronic signals.
26.08.2020
Autonomous unmanned aerial vehicles (UAVs) have shown great potential for a wide range of applications, including automated package delivery and the monitoring of large geographical areas. To complete missions in real-world environments, however, UAVs need to be able to navigate efficiently and avoid obstacles in their surroundings.
26.08.2020
The CDC reports that around 70 per cent of all foodborne diseases are caused by contaminated individuals. How can food manufacturers better manage the risks that human workers pose to food quality and safety?
26.08.2020
The novel coronavirus pandemic hit many industries hard, leaving analysts unsure of when things might bounce back for those sectors. However, the combination of the robotics industry and COVID-19 could be beneficial. Here are five reasons why.
26.08.2020
Since the pandemic began, people are focused on keeping their home and workspaces squeaky clean as an important step to prevent the spread of COVID-19. Hospitals and labs, especially, are meticulous.
25.08.2020 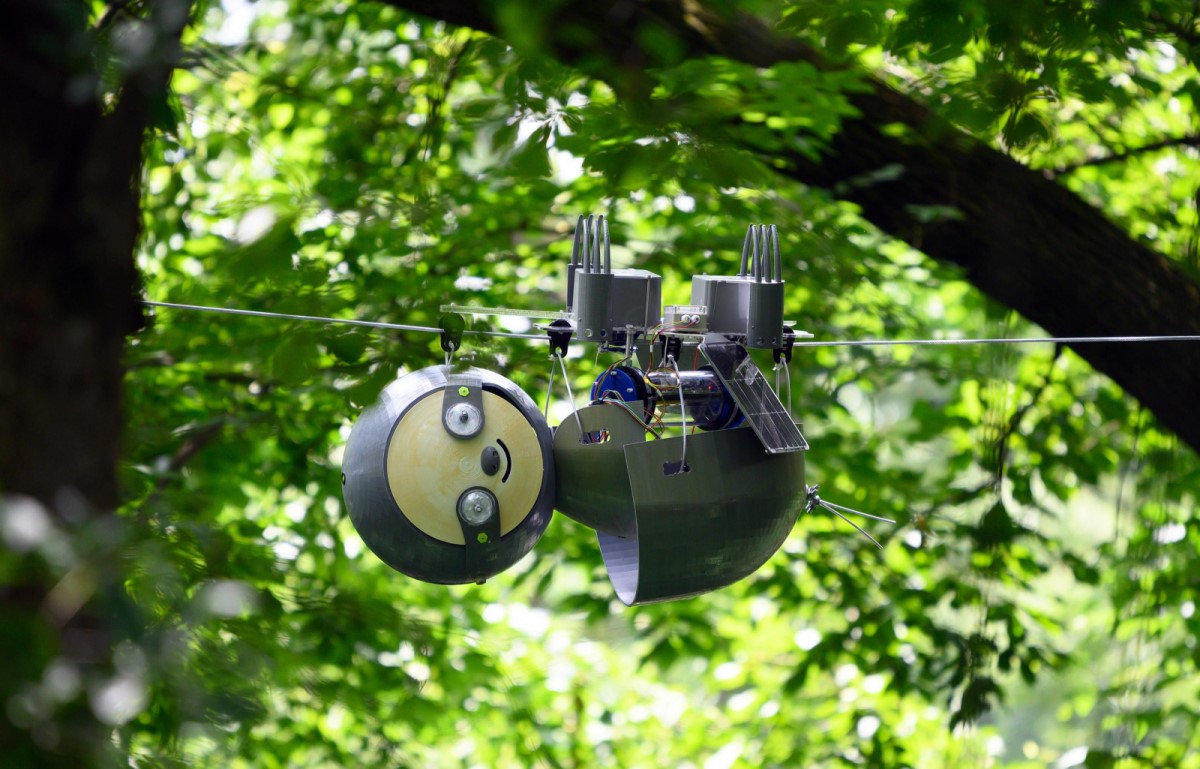 In this episode, Lauren Klein interviews Gennaro Notimista, a robotics PhD student in the Georgia Robotics and InTelligent Systems Laboratory at Georgia Tech. Gennaro discusses the SlothBot, a solar-powered robot that slowly traverses wires, like its animal namesake, to monitor the environment.

Gennaro Notomista is a robotics PhD student in the Georgia Robotics and InTelligent Systems Laboratory at Georgia Tech. Gennaro studies control frameworks, with the goal of making robots robust against a changing environment so they can handle long-duration deployments. Toward this goal, he explores constraints-driven control and approaches to coverage control, or enabling robots to traverse closed environments.  In addition to the SlothBot, Gennaro has applied his research to areas such as autonomous driving and swarm robotics.

25.08.2020
With more affordable, more adaptable and easier to program robots spurring greater utilization of robotic automation, especially for small- to mid-size enterprises (SMEs), manufacturing productivity continues to increase.
25.08.2020
Minimally invasive laparoscopic surgery, in which a surgeon uses tools and a tiny camera inserted into small incisions to perform operations, has made surgical procedures safer for both patients and doctors over the last half-century. Recently, surgical robots have started to appear in operating rooms to further assist surgeons by allowing them to manipulate multiple tools at once with greater precision, flexibility, and control than is possible with traditional techniques. However, these robotic systems are extremely large, often taking up an entire room, and their tools can be much larger than the delicate tissues and structures on which they operate.
24.08.2020
Something is different, and you can't quite put your finger on it. But your robot can.
Page 1 of 4
1 2 3 4 Next »