In 2015, after much research, I wrote about China having 194 robot companies and used screen shots of The Robot Report’s Global Map to show where they were and a chart to show their makeup. We’ve just concluded another research project and have added hundreds of new Chinese companies to the database and global map.

Why is China so focused on robots?

Simply said, China has three drivers helping them move toward country-wide adoption of robotics: scale, growth momentum, and money. Startup companies can achieve scale quickly because the domestic market is so large. Further, companies are under pressure to automate thereby causing double-digit demand for industrial robots (according to the International Federation of Robotics). Third, the government is strongly behind the move.

Chinese President Xi Jinping has called for “a robot revolution” and initiated the “Made in China 2025” program. More than 1,000 firms and a new robotics association, CRIA (Chinese Robotics Industry Alliance) have emerged (or begun to transition) into robotics to take advantage of the program, according to a 2016 report by the Ministry of Industry and Information Technology. By contrast, according to the same report, the sector was virtually non-existent a decade ago.

Under “Made in China 2025,” and the five-year robot plan launched last April, Beijing is focusing on automating key sectors of the economy including car manufacturing, electronics, home appliances, logistics, and food production. At the same time, the government wants to increase the share of in-country-produced robots to more than 50% by 2020; up from 31% last year.

Robot makers, and companies that automate, are both eligible for subsidies, low-interest loans, tax waivers, rent-free land and other incentives. One such program lured back Chinese engineers working overseas; another oversaw billions of dollars poured into technology parks dedicated to robotics production and related businesses; another encouraged local governments to help regional companies deploy robots in their production processes; and despite its ongoing crackdown on capital outflows, green lights have been given to Chinese companies acquiring Western robotics technology companies. 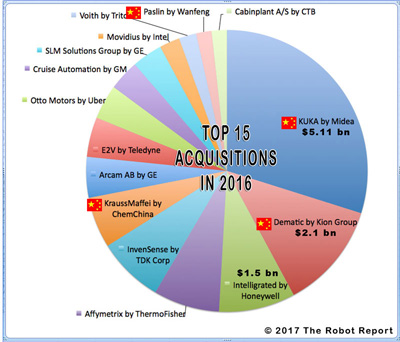 Many of those acquisitions were reported by The Robot Report during 2016 and are reflected (with little red flags) in the chart reporting the top 15 acquisitions of robotic-related companies:

China has set goals to be able to make 150,000 industrial robots in 2020; 260,000 in 2025; and 400,000 by 2030. If achieved, the plan should help generate $88 billion over the next decade. China’s stated goal in both their 5-year plan and Made in China 2025 program is to overtake Germany, Japan, and the United States in terms of manufacturing sophistication by 2049, the 100th anniversary of the founding of the People’s Republic of China. To make that happen, the government needs Chinese manufacturers to adopt robots by the millions. It also wants Chinese companies to start producing more of those robots.​

Various research reports are predicting that more than 250,000 industrial pick and place, painting and welding robots will be purchased and deployed in China by 2019. That figure represents more than the total global sales of all types of industrial robots in 2014!

Research firms predicting dramatic growth for the domestic Chinese robotics industry are also predicting very low-cost devices. Their reports are contradicted by academics, roboticists and others who point out that there are so many new robot manufacturing companies in China that none will be able to manufacture many thousand robots per year and thus benefit from scale. Further, many of the components that comprise a robot are intricate and costly, e.g., speed reducers, servo motors and control panels. Consequently these are purchased from Nabtesco, Harmonic Drive, Sumitomo and other Japanese, German and US companies. Although a few of the startups are attempting to make reduction gears and other similar devices, the lack of these component manufacturers in China may put a cap on how low costs can go and on how much can be done in-country for the time being.

“We aim to increase the market share of homegrown servomotors, speed reducers and control panels in China to over 30 percent by 2018 or 2019,” said Qu Xianming, an expert with the National Manufacturing Strategy Advisory Committee, which advises the government on plans to upgrade the manufacturing sector. “By then, these indigenous components could be of high enough quality to be exported to foreign countries,” Qu said in an interview with China Daily. “Once the target is met, it will lay down a strong foundation for Chinese parts makers to expand their presence.”

Regardless, China, with governmental directives and incentives, has become both the world’s biggest buyer of robots and also is growing a very large in-country industry to make and sell robots of all types.

The Robot Report and its research team have been able to identify over 500 companies that make or are directly involved in making robots in China. The CRIA (China Robot Industry Alliance), and other sources, proffer the number to be closer to 800. The Robot Report is limited by our own research capabilities, language translation limitations, and scarcity of information about robotics companies and their websites and contact people in China. 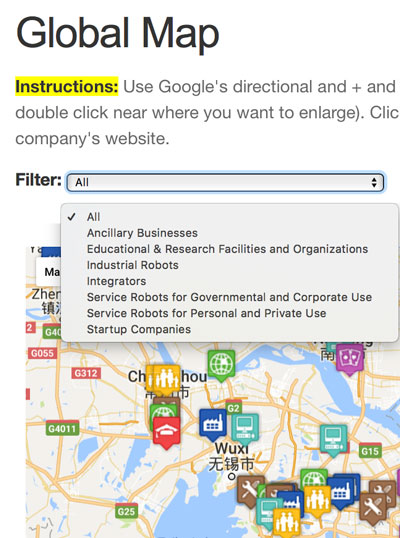 These companies are combined with other global companies – now totaling over 5,300 – in our online directories and plotted on our global map so that you can research by area. You can explore online and filter in a variety of ways.

Use Google’s directional and +/- markers to navigate, enlarge, and hone in on a geographical area of interest (or double click near where you want to enlarge). Click on one of the colored markers to get a pop-up window with the name, type, focus, location and a link to the company’s website.

[NOTE: the map shows a single entry for the company headquarters regardless how many branches, subsidiaries and factory locations that company might have, consequently international companies with factories and service centers in China won’t appear. Further note that The Robot Report’s database doesn’t contain companies that just use robots; it focuses on those involved in making robots.]

The Filter pull-down menu lets you choose any one of the seven major categories:

In the chart below, 500 Chinese companies are tabulated by their business type and area of focus. Please note that your help would be greatly appreciated by adding to the map and making it as accurate and up-to-date as possible. Please send robotics-related companies that we have missed (or are new) to info@therobotreport.com.