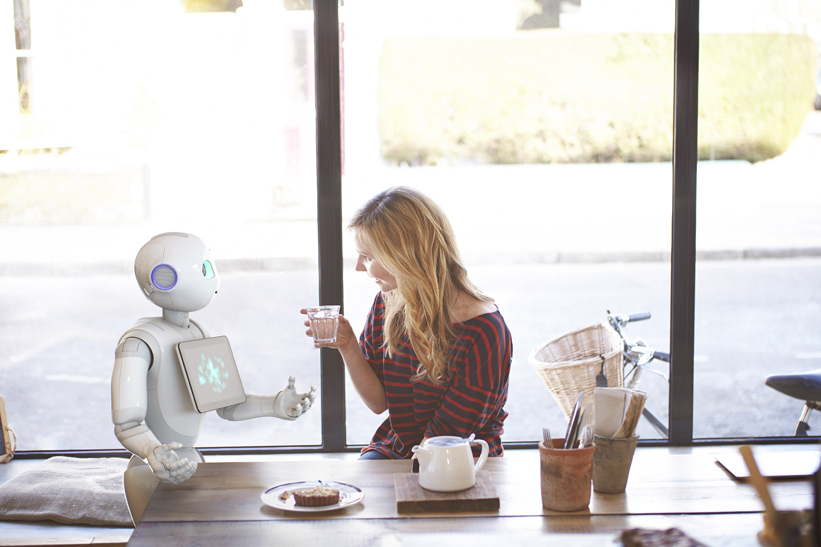 It is unclear if Masayoshi Son, Chairman of Softbank, was one of the 17 million YouTube viewers of Boston Dynamic’s Big Dog before acquiring the company for an undisclosed amount this past Thursday. What is clear is the acquisition of Boston Dynamics by Softbank is a big deal. Softbank’s humanoid robot Pepper is trading up her dainty wheels for a pair of sturdy legs. 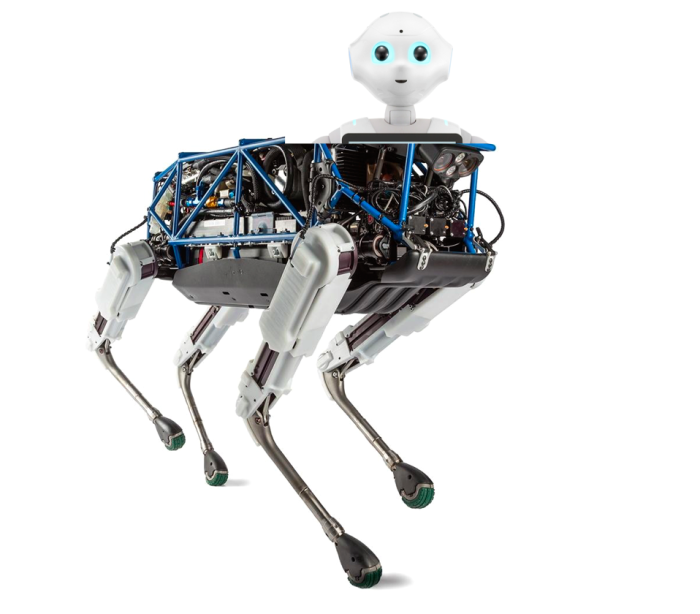 In expressing his excitement for the acquisition, Masayoshi Son said, “Today, there are many issues we still cannot solve by ourselves with human capabilities. Smart robotics are going to be a key driver of the next stage of the Information Revolution, and Marc and his team at Boston Dynamics are the clear technology leaders in advanced dynamic robots. I am thrilled to welcome them to the SoftBank family and look forward to supporting them as they continue to advance the field of robotics and explore applications that can help make life easier, safer and more fulfilling.”

Marc Raibert, CEO of Boston Dynamics, previously sold his company to Google in 2013. Following the departure of Andy Rubin from Google, the internet company expressed buyers remorse. Raibert’s company failed to advance from being a military contractor to a commercial enterprise. It became very challenging incorporating Boston Dynamic’s zoo of robots (mechanical dogs, cheetahs, bulls, mules and complex humanoids) into Google’s autonomous strategy. Since Rubin’s exit in 2014, rumors of buyers acquiring Boston Dynamics from Google have ranged from Toyota Research to Amazon Robotics. Softbank represents a new chapter for Raibert, and possible the entire industry. 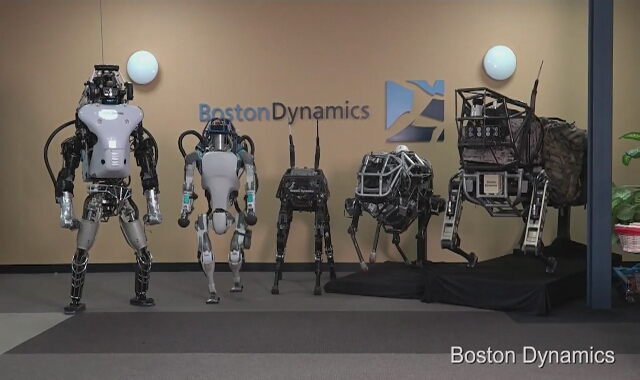 Raibert’s statement to the press gave astute readers a peek of what to expect: “We at Boston Dynamics are excited to be part of SoftBank’s bold vision and its position creating the next technology revolution, and we share SoftBank’s belief that advances in technology should be for the benefit of humanity. We look forward to working with SoftBank in our mission to push the boundaries of what advanced robots can do and to create useful applications in a smarter and more connected world.” A quick study of the assets of both companies reveals how Boston Dynamics could help Softbank in its mission to build robots to benefit humanity.

Softbank’s premier robot is Pepper, a four-foot tall social robot that has been mostly deployed in Asia as a customer service agent. Recently, Pepper, as part of Softbank’s commitment to the Trump administration to invest $50 billion in the United States has been spotted in stores in California. As an example, Pepper proved itself as a valuable asset last year to Palo Alto’s premier tech retailer B8ta, accounting for a 6 times increase in sales. To date, there are close to 10,000 Pepper robots deployed worldwide, mostly in Asian retail stores. However, Softbank is also the owner of Sprint with 4,500 cell phone stores across the USA, and a major investor in WeWork with 140 locations globally servicing 100,000 members – could Pepper be the customer service agent or receptionist of the future?

According to Softbank’s website, Pepper is designed to be a “day-to-day companion,” with its most compelling feature being the ability to perceive emotions. Softbank boasts that their humanoid is the first robot ever to recognize moods of homo sapiens and adapt its behavior accordingly. While this is extremely relevant for selling techniques, Softbank is most proud of Pepper being the first robot to be adopted into homes in Japan. It is believed that Pepper is more than a point-of-purchase display gimmick, but an example of the next generation of caregivers for the rising elderly populations in Japan and the United States. According to the Daily Good, “Pepper could do wonders for the mental engagement and continual monitoring of those in need.” Its under $2,000 price point also provides an attractive incentive to introduce the robot into new environments, however wheel-based systems are a limitation in the home with clutter floors, stairs and other unforeseen obstacles. 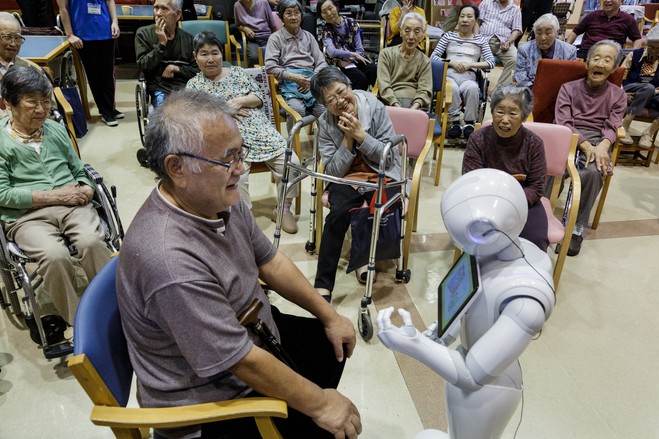 Boston Dynamics is almost the complete opposite of Softbank; it is a research group spun out of MIT. Its expertise is not in social robots but in military “proofs of concepts” like futuristic combat mules. The company has touted some of the most frightening mechanical beasts to ever walk the planet from metal Cheetahs that sprint at over 25 miles per hour to mechanized dogs that scale mountains with ease to one of the largest humanoids every built that has an uncanny resemblance to Cyberdyne’s T-800. In a step towards commercialization, Boston Dynamics released earlier this year its newest monster – a wheel-biped leg robot named Handle that can easily lift over a hundred pounds and jump higher than Lebron James. Many analysts pontificated that this appeared to be Boston Dynamics attempt to prove its relevance to Google with a possible last mile delivery bot.

In an IEEE interview when Handle debuted last February, Raibert exclaimed, “Wheels are a great invention. But wheels work best on flat surfaces and legs can go anywhere. By combining wheels and legs, Handle can have the best of both worlds.” IEEE writer Evan Ackerman questioned, after seeing Handle, if the next generation of Boston Dynamic’s humanoids could feature legs with roller-skate like shoes. One is certain that Boston Dynamics is the undisputed leader of dynamic control and balance systems for complex mechanical designs.

Leading roboticist Dan Kara of ABI Research confirmed that “these [Boston Dynamics] are the world’s greatest experts on legged mobility.”

If walking is the expertise of Raibert’s team and Softbank is the leader of cognitive robotics with a seemingly endless supply of capital, the combination could be the first real striding humanoid capable of human-like emotions. By 2030 there will be 70 million people over the age of 65 years in America, with a considerable smaller amount of caregivers. To answer this call researchers are already converting current versions of Pepper into sophisticated robotic assistants. Last year, Rice University unveiled a “Multi-Purpose Eldercare Robot Assistant (MERA)” which is essentially a customized version of the Softbank’s robot. MERA is specifically designed to be a home companion for seniors that “records and analyzes videos of a person’s face and calculates vital signs such as heart and breathing rates.” Rice University partnered with IBM’s Aging-in-Place Research Lab to create MERA’s speech technology. IBM’s Lab founder, Susann Keohane, explained that Pepper “has everything bundled into one adorable self.” Now with Boston Dynamic’s legs Pepper could be a friend, physical therapist, and life coach walking side by side with its human companion.

Daniel Theobald, founder of Vecna Technologies – a healthcare robotic company, summed it best last week, “I think Softbank has made a major commitment to the future of robotics. They understand that the world economy is going to be driven by robotics more and more.”

Next Tuesday we will dive further into the implications of Softbank’s purchase of Boston Dynamics with Dr. Howard Morgan/First Round Capital, Tom Ryden/MassRobotics and Dr. Eric Daimler/Obama White House at RobotLabNYC’s event on 6/13 @ 6pm WeWork Grand Central (RSVP).