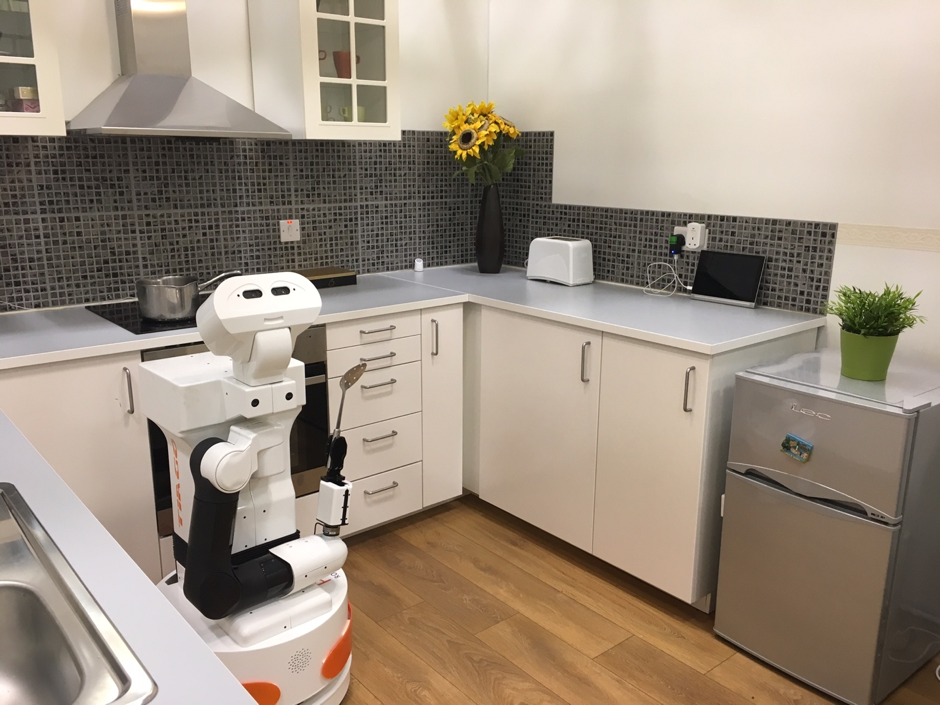 The Bristol Robotics Laboratory (BRL) will host the first European- Commission funded European Robotics League (ERL) tournament for service robots to be held in the UK.

Two teams from the BRL and Birmingham will pitch their robots against each other in a series of events from 26 and 30 June.

Robots designed to support people with care-related tasks in the home will be put to the test in a simulated home test bed.

The assisted living robots of the two teams will face various challenges, including understanding natural speech and finding and retrieving objects for the user.

The robots will also have to greet visitors at the door appropriately, such as welcoming a doctor on their visit, or turning away unwanted visitors.

Associate Professor Praminda Caleb-Solly, Theme Leader for Assistive Robotics at the BRL said, “The lessons learned during the competition will contribute to how robots in the future help people, such as those with ageing-related impairments and those with other disabilities, live independently in their own homes for as long as possible.

“This is particularly significant with the growing shortage of carers available to provide support for an ageing populations.”

The BRL, the host of the UK’s first ERL Service Robots tournament, is a joint initiative of the University of the West of England and the University of Bristol. The many research areas include swarm robotics, unmanned aerial vehicles, driverless cars, medical robotics and robotic sensing for touch and vision. BRL’s assisted living research group is developing interactive assistive robots as part of an ambient smart home ecosystem to support independent living.

The ERL Service Robots tournament will be held in the BRL’s Anchor Robotics Personalised Assisted Living Studio, which was set up to develop, test and evaluate assistive robotic and other technologies in a realistic home environment.

The studio was recently certified as a test bed by the ERL, which runs alongside similar competitions for industrial robots and for emergency robots, which includes vehicles that can search for and rescue people in disaster-response scenarios.

The two teams in the Bristol event will be Birmingham Autonomous Robotics Club (BARC) led by Sean Bastable from the School of Computer Science at the University of Birmingham, and the Healthcare Engineering and Assistive Robotics Technology and Services (HEARTS) team from the BRL led by PhD Student Zeke Steer.

BARC has developed its own robotics platform, Dora, and HEARTS will use a TIAGo Steel robot from PAL Robotics with a mix of bespoke and proprietary software.

The Bristol event will be open for public viewing in the BRL on the afternoon of the 29th of June 2017 (Bookable via EventBrite), and include short tours of the assisted living studio for the attendees. It will be held during UK Robotics Week, on 24-30 June 2017, when there will be a nationwide programme of robotics and automation events.

The BRL will also be organising focus groups on 28 and 29 June 2017 (Bookable via EventBrite and here) as part of the UK Robotics Week, to demonstrate assistive robots and their functionality, and seek the views of carers and older adults on these assistive technologies, exploring further applications and integration of such robots into care scenarios.

The European Commission-funded European Robotics League (ERL) is the successor to the RoCKIn, euRathlon and EuRoC robotics competitions, all funded by the EU and designed to foster scientific progress and innovation in cognitive systems and robotics. The ERL is funded by the European Union’s Horizon 2020 research and innovation programme. See: https://www.eu-robotics.net/robotics_league/

euRobotics is a European Commission-funded non-profit organisation which promotes robotics research and innovation for the benefit of Europe’s economy and society. It is based in Brussels and has more than 250 member organisations. See: www.eu-robotics.net