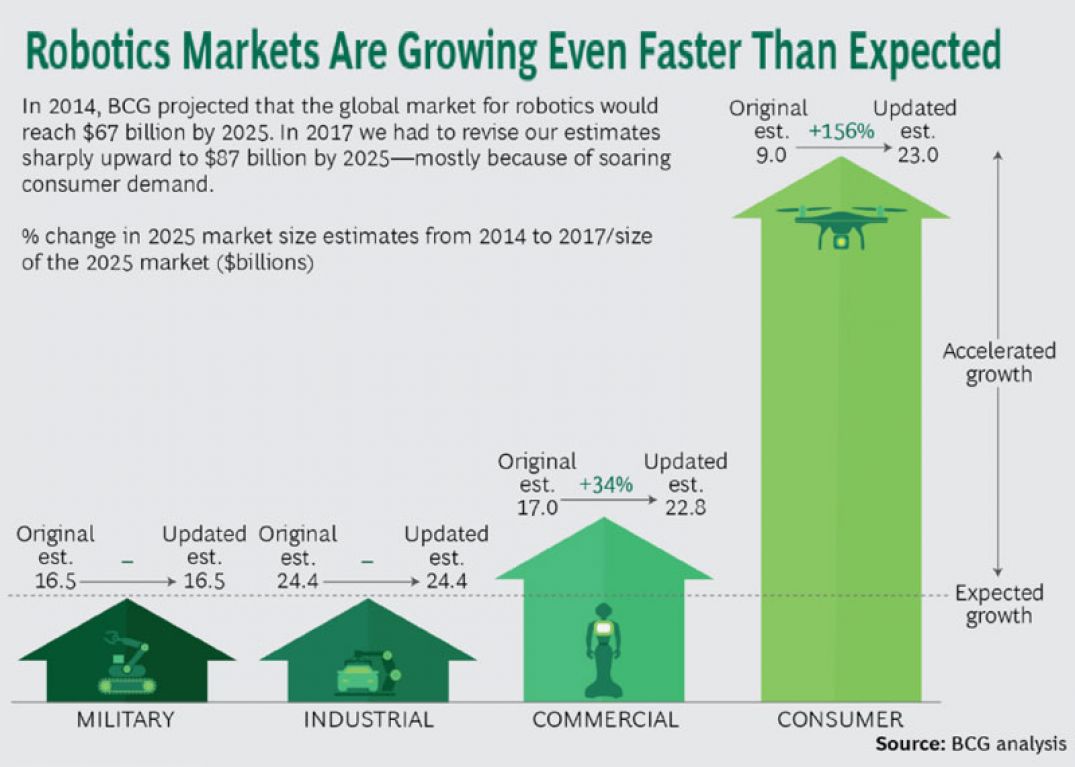 Two reputable research resources are reporting that the robotics industry is growing more rapidly than expected. BCG (Boston Consulting Group) is conservatively projecting that the market will reach $87 billion by 2025; Tractica, incorporating the robotic and AI elements of the emerging self-driving industry, is forecasting the market will reach $237 billion by 2022.

Both research firms acknowledge that yesterday’s robots — which were blind, big, dangerous and difficult to program and maintain — are being replaced and supplemented with newer, more capable ones. Today's new, and future robots, will have voice and language recognition, access to super-fast communications, data and libraries of algorithms, learning capability, mobility, portability and dexterity. These new precision robots can sort and fill prescriptions, pick and pack warehouse orders, sort, inspect, process and handle fruits and vegetables, plus a myriad of other industrial and non-industrial tasks, most faster than humans, yet all the while working safely along side them.

“Amazon gained a first-mover advantage in 2012 when it bought Kiva Systems, which makes robots for warehouses. Once a Kiva customer, Amazon acquired the robot maker to improve the productivity and margins of its network of warehouses and fulfillment centers. The move helped Amazon maintain its low costs and expand its rapid delivery capabilities. It took five years for a Kiva alternative to hit the market. By then, Amazon had a jump on its rivals and had developed an experienced robotics team, giving the company a sustainable edge.”

The key story is that industrial robotics, the traditional pillar of the robotics market, dominated by Japanese and European robotics manufacturers, has given way to non-industrial robot categories like personal assistant robots, UAVs, and autonomous vehicles, with the epicenter shifting toward Silicon Valley, which is now becoming a hotbed for artificial intelligence (AI), a set of technologies that are, in turn, driving a lot of the most significant advancements in robotics. Consequently, Tractica forecasts that the global robotics market will grow rapidly between 2016 and 2022, with revenue from unit sales of industrial and non-industrial robots rising from $31 billion in 2016 to $237.3 billion by 2022.  The market intelligence firm anticipates that most of this growth will be driven by non-industrial robots.

Tractica is headquartered in Boulder and analyzes global market trends and applications for robotics and related automation technologies within consumer, enterprise, and industrial marketplaces and related industries.