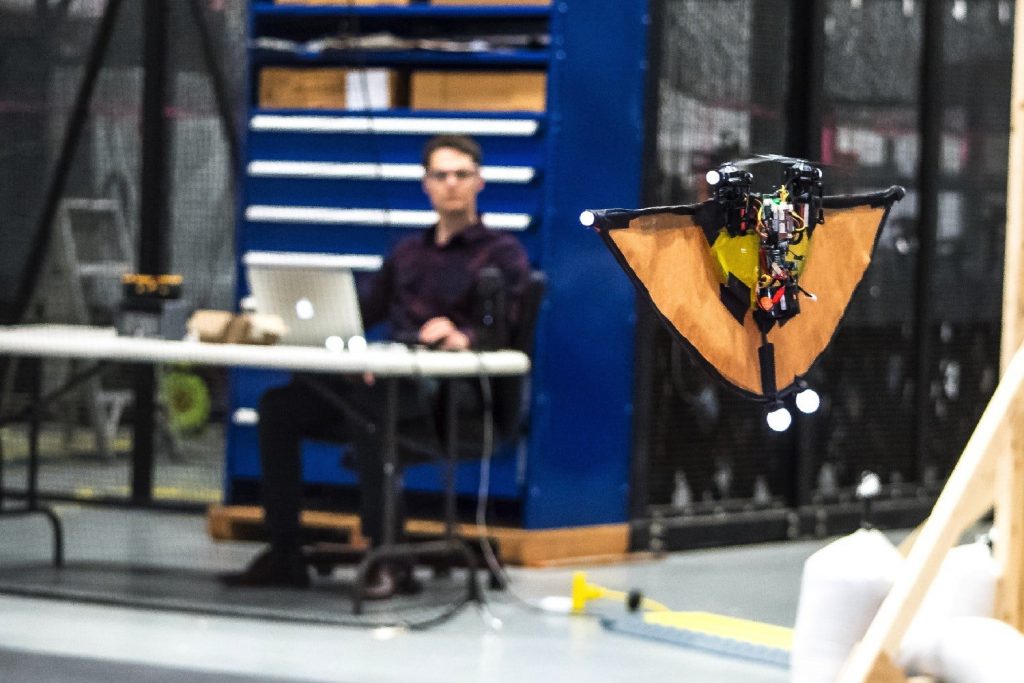 The U.S. Army is developing a drone that moves like a flying squirrel. Credit: David McNally/U.S. Army

The U.S. Federal Aviation Administration is offering refunds to drone hobbyists who paid the $5 fee to register with the agency. The move follows a federal court ruling in May that found that the FAA could not compel recreational drone users to register. The FAA has collected over $4 million in fees since it implemented the registration policy in December 2015. (Recode)

In a report published by the Mitchell Institute, Gen. David Deptula argues that the U.S. Department of Defense should create an office for unmanned aircraft to coordinate efforts across the different services. (Breaking Defense)

At Lawfare, Kenneth Anderson and Matthew Waxman present a primer on the legal and ethical debates over autonomous weapons.

At the Jamestown Foundation, Elsa Kania writes that the China is seeking to leverage recent advances in swarming drones to bolster its military.

At Breaking Defense, Sydney J. Freedberg Jr. looks at how the lack of trust between humans and unmanned systems will inhibit the integration of robots in the future.

At the Morning Consult, Edward Graham writes that recent legislation in Congress would enable localities to have a greater say in drone regulations.

At TechCrunch, Helen Greiner discusses how robots and drones have taken on more and more roles.

At Drone360, Lauren Sigfusson looks at how the FAA’s Part 107 waiver and authorization process has changed in recent weeks.

At Arkansas Matters, Chris Pulliam says that crop dusters are concerned about the potential threats posed to their aircraft by drones.

At DefenseNews, Burak Ege Bekdil writes that Turkey is increasingly relying on drones for border security, counterterrorism, and operations against Kurdish groups.

At the National Interest, Samuel Bendett considers whether Russia will ever be able to catch up with the U.S. and Israel in terms of drone development.

In a letter to the editor of the Pocono Record, Pete Sauvigne argues that a local model aircraft club should not be stripped of its permission to fly in the Delaware Water Gap National Recreation Area.

At The Drive, Marco Margaritoff looks at a few of National Geographic’s best drone photos of year to date. Know Your Drone

The U.S. Army is developing a drone that moves like a flying squirrel. (Popular Mechanics)

Meanwhile, the Army is developing a system that allows a single human operator to control multiple drones. (Press Release)

Italian firm Piaggio has resumed flight testing of its HammerHead military drone a year after the program was grounded due to a crash. (AIN Online)

A group of researchers in Florida is developing an underwater drone that seeks out and collects lionfish, an invasive species in the area. (Pensacola News Journal)

Researchers at the University of California, Berkeley are developing a jumping one-legged robot that could eventually be used for search and rescue. (Wired)

The U.S. Coast Guard will begin evaluating different small drones with the goal of acquiring a system in 2018. (C4ISRNet)

An inmate who broke out of a South Carolina prison reportedly escaped using tools delivered to him by a drone. (The New York Times)

The Russian Navy is reportedly displeased with the performance of its Inspector Mk2 unmanned surface vehicle developed by French firm ECA Group. (Mil.Today)

Officials in Kaziranga National Park in India are using drones to monitor wildlife displaced by recent floods in the area. (Hindustan Times)

Meanwhile, Police in Nashville, Tennessee arrested a man for flying a drone over a large crowd during a Fourth of July celebration. (Fox 17)

The French Air Force flew one of its MQ-9 Reaper drones in civilian domestic airspace for the first time. (Aviation Analysis Wing)

Ohio has passed a law that permits ground delivery robots to operate on sidewalks. It is the fifth U.S. state to pass such a law. (Recode)

A volunteer rescue group in Italy is using drones to look for signs of possible impending rock slides before they happen. (Motherboard)

The U.S. Army awarded Assist Consultants a $18.1 million contract to build a facility for the Navy’s MQ-4C Triton at Al Dhafra Air Base in the United Arab Emirates. (FBO)

The Department of Justice awarded AARDVARK a $51,247 contract for backpackable robots. (FBO)

Germany is pausing plans to acquire the Israel Aerospace Industries Heron military drone until after its upcoming election. (DefenseNews)

Meanwhile, Indonesia and Turkey agreed to cooperate on the development of military systems and technologies, including drones. (IHS Jane’s Defence Weekly)

The Israeli military awarded Duke Robotics, a Florida-based startup, a contract for the TIKAD, a quadrotor drone that can be armed with a machine gun or grenade launcher. (Defense One)

For updates, news, and commentary, follow us on Twitter. The Weekly Drone Roundup is a newsletter from the Center for the Study of the Drone. It covers news, commentary, analysis and technology from the drone world. You can subscribe to the Roundup here.