Jim Robinson of RRE Ventures said it best last month at the Silicon Dragon Conference when comparing Silicon Valley to New York, “There are two kinds of centers that have a lot of startups and technology, there are technology centers and commerce centers.” New York falls into the later category, while the Valley is the former. Sitting next to Jim, I reflected that Singapore might be in both groups, an Asian commerce hub and a leader in mechatronics. As an advocate for automation, I am often disheartened that the United States significantly lags behind its industrial counterparts in manufacturing autonomous machines. The key to a pro-job policy could be gleaning from the successes of countries like Singapore to implement America’s own ‘Robot First Plan.’

Last August, Singapore became the first country to permit autonomous taxis on its roads. Boston-based startup nuTonomy moved its operations to the Far East, which enabled the company to launch public trials weeks before Uber’s test in Pittsburgh. The secret to the company’s speed to market was to skip America’s 19,492 municipal government licensing departments to pilot its technology years before any of the other competing technologies, with the exception of Google’s Waymo. In addition to less regulatory hoops, the Singapore Land Transport Authority has partnered with nuTonomy on its rollout.

Pang Kin Keong, Singapore’s Permanent Secretary for Transport and the Chairman of its Committee on autonomous driving, said “We face constraints in land and manpower. We want to take advantage of self-driving technology to overcome such constraints, and in particular to introduce new mobility concepts which could bring about transformational improvements to public transport in Singapore.”

The company is on track to offer its driverless taxis throughout the country by 2018. Doug Park’s, nuTonomy’s COO, estimates that autonomous taxis could ultimately reduce the number of cars on Singapore’s roads from 900,000 to 300,000. Park explains, “When you are able to take that many cars off the road, it creates a lot of possibilities. You can create smaller roads, you can create much smaller car parks. I think it will change how people interact with the city going forward.” Park’s partnership with the city-state is made possible because Singapore is not straddled with the costs of aging infrastructure like many US and European cities.

Since first announcing its test in 2016, nuTonomy is on pace to expand globally with its recent partnership with ride-sharing company Lyft in a pilot in Boston. Karl Lagnemma, nuTonomy’s CEO, said: “By combining forces with Lyft in the U.S., we’ll be positioned to build the best passenger experience for self-driving cars. Both companies care immensely about solving urban transportation issues and the future of our cities, and we look forward to working with Lyft as we continue to improve our autonomous vehicle software system.” 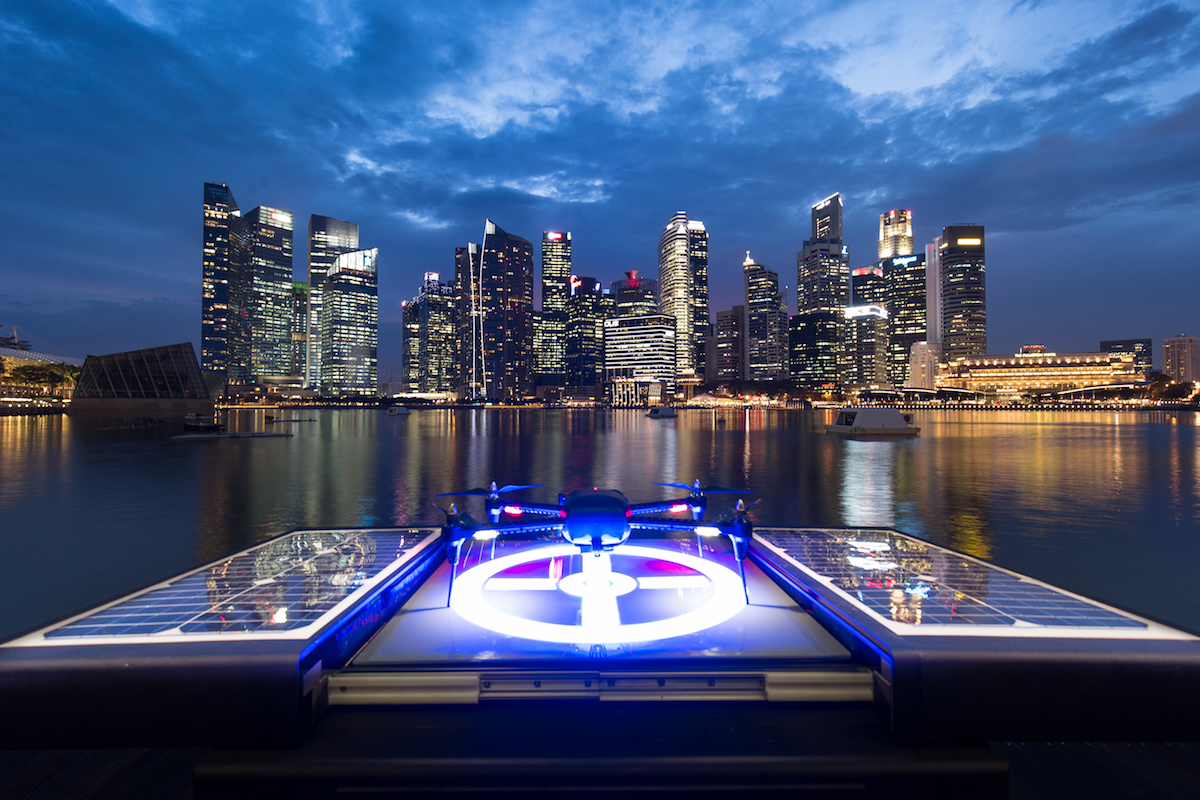 Besides autonomous vehicles, drones have been widely embraced by Singapore’s infamously strict police department. Singaporean startup H3 Dynamics became the first company last year to launch a drone in the box solution that offers storage and charging stations in the field. H3’s “DRONEBOX” is a unique solar-based charging station that enables longer autonomous missions in areas that are typically hostile for humans. Since showcasing its technology above the streets of Singapore, H3 faces increased competition from formidable upstarts, including: Airobotics, EasyAriel, and HiveUAV.

According to its original press release, “DRONEBOX is an all-inclusive, self-powered system that can be deployed anywhere, including in remote areas where industrial assets, borders, or sensitive installations require constant monitoring. Designed as an evolution over today’s many unattended sensors and CCTV cameras installed in cities, borders, or large industrial estates, DRONEBOX innovates by giving sensors freedom of movement using drones as their vehicles. End-users can now deploy flying sensor systems at different locations, and measure just about anything, anywhere, anytime. They offer 24/7 reactivity, providing critical information to operators – even to those located thousands of miles away.”

In June, Dynamic H3 announced the opening of new drone operation centers to include Europe, America and the Middle East. Additionaly, H3 is now marketing its next generation of battery technology for extended high-value asset missions. H3’s HES Energy Systems is the product a decade-long research initiative between the company and the Singaporean government. Unlike typical drone lithium batteries that have a flight-time of 20-40 minutes, HES Energy’s developed its ground-breaking 6 hour battery (above) with a first of its kind “solid-hydrogen on demand powered system.” The combination of longer flights, self-charging stations and autonomous missions is a powerful value proposition for this Singaporean offering in differentiating itself in an already crowded unmanned flight market.

This past week, Dubai announced its plans to roll out a fleet of mini autonomous police cars for surveillance and crime prevention. This effort is part of the Middle Eastern city’s program to automate 25% of its police force over the next decade. The Gulf State’s ambitious plans were a perfect fit for Singaporean OTSAW Digital, a division of ActiV-a global tech powerhouse. Similar to nuTonomy and H3, OTSAW’s O-R3 grew out of the innovation friendly environment of the Asian republic.

OR-3 is smaller than a golf cart, and not meant actually to capture nefarious actors, but to identify suspicious activity while it is happening. Using facial recognition technology and a built-in ariel drone, the robot will begin patrolling the Dubai beat by the end of the year. The autonomous car/drone combo is almost a hybrid of nuTonomy and H3, with an array of sensors and machine intelligence technologies to survey the area via thermal imaging, license plate readers and cloud-based computing.

According to Abdullah Khalifa Al Marri, the head of the Dubai police department, the OR-3 isn’t meant to replace officers but rather to augment their skills with more efficient resources. “We seek to augment operations with the help of technology such as robots. Essentially, we aim for streets to be safe and peaceful without heavy police patrol,” said Al Marri. Last month, Dubai even deployed a humanoid-looking robot to monitor tourist attractions, dubbed Robocop, that speaks English and Arabic. According to Dubai, it plans to deploy larger humanoids that stand over 10 feet tall and go over 50 mph, while the human controller operates the device inside the robots.

Brigadier-General Khalid Nasser Al Razzouqi, Director-General of Smart Services at Dubai Police’s department, boasted, “The launch of the world’s first operational Robocop is a significant milestone for the Emirate and a step towards realizing Dubai’s vision to be a global leader in smart cities technology adoption.” In 2015, The World Economic Forum ranked the United Arab Emirates as the second most tech savvy government in the world, just behind Singapore.

As I write this article I find myself at another conference, “The State of New York: Smart Cities.” Hoping for insights about how my city will compete with the likes of these tech savvy counterparts, I was met by a group of bureaucrats touting App Competitions and Free WiFi. One speaker even suggested that the Metropolitan Transportation Authority (MTA) is run by the best executive team, even though New York’s Governor has politely called the organization dysfunctional due to multiple train derailments, signal problems, and overcrowded stations (see: The Summer of Hell). Science is not just about the possible, but the willing. Singapore’s ability to reinvent the very nature of how a city operates and partners with the private sector is proof positive that even a country founded 50 years ago can climb to the “top of the heap.”