Robocar/LIDAR news and video of the Apple car 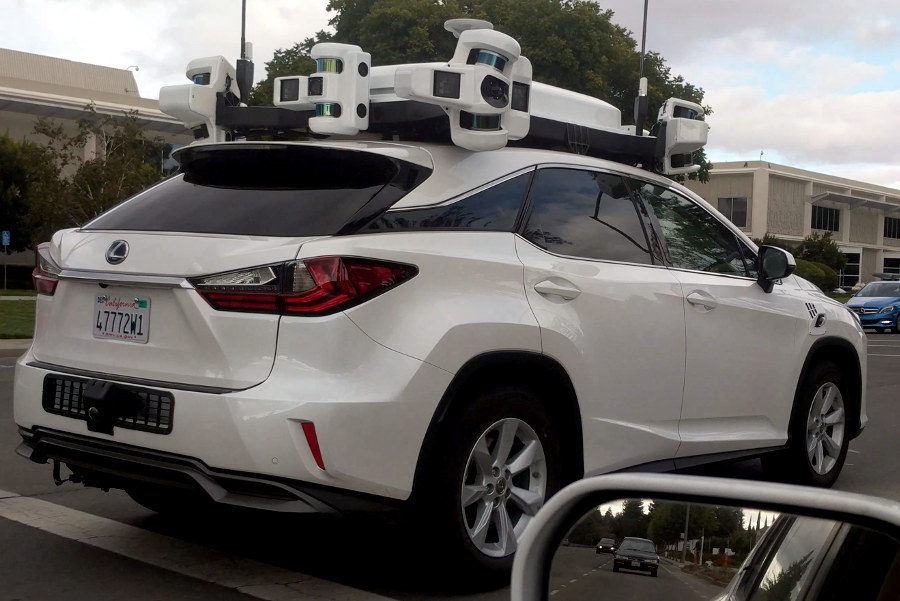 Robocar news is fast and furious these days. I certainly don’t cover it all, but will point to stories that have some significance. Plus, to tease you, here’s a clip from my 4K video of the new Apple car that you’ll find at the end of this post.

There are many startups in the Lidar space. Recently, Ford’s Argo division purchased Princeton Lightwave a small LIDAR firm which was developing 1.5 micron lidars. 1.5 micron lidars include Waymo’s own proprietary unit (subject of the lawsuit with Uber) as well as those from Luminar and a few others. Most other lidar units work in the 900nm band of near infrared.

Near infrared lasers and optics can be based on silicon, and silicon can be cheap because there is so much experience and capacity devoted to making it. 1.5 micron light is not picked up by silicon, but it’s also not focused by the lens of the eye. That means that you can send out a lot more power and still not hurt the eye, but your detectors are harder to make. That extra power lets you see to 300m, while 900nm band lidars have trouble with black objects beyond 100m.

100m is enough for urban driving, but is not a comfortable range for higher speeds. Radar senses far but has low resolution. Thus the desire for 1.5 micron units.

GM/Cruise also bought Strobe, a small lidar firm with a very different technology. Their technology is in the 900nm band, but they are working on ways to steer the beam without moving mirrors the way Velodyne and others do. (Quanergy, in which I have stock, also is developing solid state units, as are several others.) They have not published but there is speculation on how Strobe’s unit works.

What’s interesting is that these players have decided, like Waymo, Uber and others, that they should own their own lidar technology, rather than just buy it from suppliers. This means one of two things:

On the surface, neither of these should be true. Suppliers are all working on making lidars because most people think they will be needed. And folks are working on both 900nm and 1.5 micron units, eager to sell. It’s less clear if any of these units will be significantly better than the ones the independent suppliers are building. That’s what is needed to get a competitive edge. The unit needs to be longer range, better resolution, better field of view or more reliable than supplier units. It’s not clear why that will be, but nobody has released solid specs.

What shouldn’t matter is that they can make it cheaper in-house, especially for those working on taxi service. First of all, it’s very rare you can get something cheaper by buying the entire company. Secondly, it’s not important to make it much cheaper for the first few years of production. Nobody is going to win or lose based on whether their taxi unit costs a few thousand more dollars to make.

So there must be something else that is not revealed driving these acquisitions.

Velodyne, which pioneered the lidar industry for self-driving cars, just announced their new
128 line lidar with twice the planes and 4x the resolution of the giant “KFC Bucket” unit found on most early self-driving car prototypes.

The $75,000 64-laser Velodyne kick-started the industry, but it’s big and expensive. This new one will surely also be expensive but is smaller. In a world where many are working with the 16 and 32 laser units, the main purpose of this unit, I think, will be for those who want to develop with the sensor of the future.

Doing your R&D with high-end gear is often a wise choice. In a few years, the high resolution gear will be cheaper and ready for production, and you want to be ready for that. At the same time, it’s not yet clear how much 128 lines gains over 64. It’s not easy to identify objects in lidar, but you don’t absolutely have to so most people have not worried too much about it.

Pioneer, the Japanese electronics maker, has also developed a new lidar. Instead of trying to steer a laser entirely with solid state techniques, theirs uses MEMS mirrors, similar to those in DLP projectors. This is effectively solid state even though the mirrors actually move. I’ve seen many lidar prototypes that use such mirrors but for some reason they have not gone into production. It is a reasonably mature technology, and can be quite low cost.

Delphi recently bought Nutonomy, the Singapore/MIT based self-driving car startup. I remember visiting them a few time s in Singapore and finding them to be not very far along compared to others. Far enough along to fetch $400M. Delphi is generally one of the better-thinking tier one automotive suppliers and now it can go full-stack with this purchase.

Of course, since most automakers have their own full stack efforts underway, just how many customers will the full-stack tier one suppliers sell to? They may also be betting that some automakers will fail in their projects, and need to come to Delphi, Bosch or others for rescue.

Another big investment is Baidu’s “Project Apollo.” This “moonshot” is going to invest around $1.5B in self-driving ventures, and support it with open source tools. They have lots of partners, so it’s something to watch.

Navya was the first company to sell a self-driving car for consumer use. Now their new vehicle is out. In addition, yesterday in Las Vegas, they started a pilot and within 2 hours had a collision. Talk about bad luck — Navya has been running vehicles for years now without such problems. It was a truck that backed into the Navya vehicle, and the truck driver’s fault, but some are faulting it because all it did was stop dead when it saw the truck coming. It did not back out of the way, though it could have. Nobody was hurt.

Aurora, the startup created by Chris Urmson after he left Waymo, has shown off its test vehicles. No surprise, they look very much like the designs of Waymo’s early vehicles, a roof rack with a Velodyne 64 laser unit on top. The team at Aurora is top notch, so expect more.

Apple’s cars are finally out and about. Back in September I passed one and took a video of it.

You can see it’s loaded with sensors. No fewer than 12 of the Velodyne 16 laser pucks and many more to boot. Apple is surely following that philosophy of designing for future hardware.