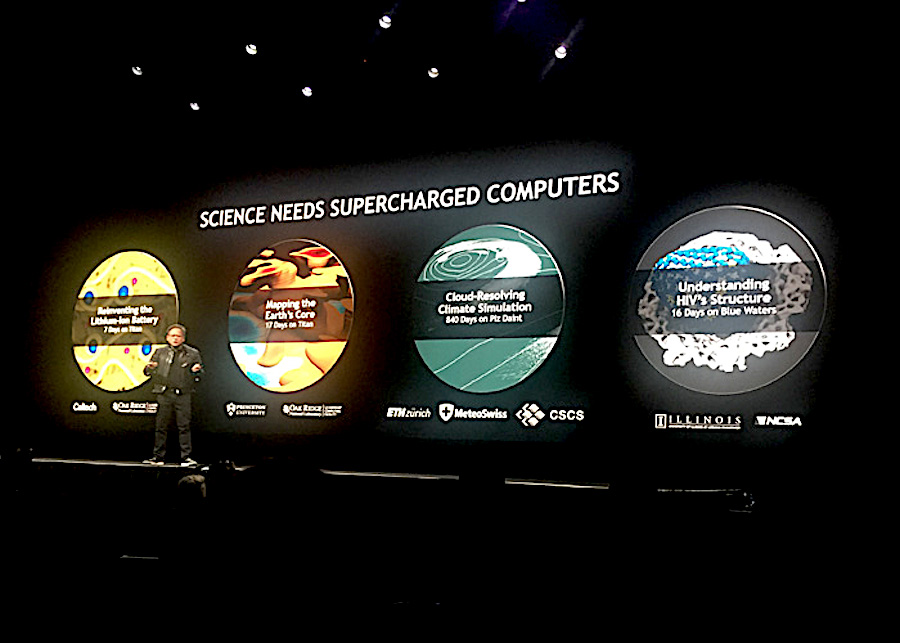 In a 2+ hour talk that filled the Keynote Hall and spillover rooms at the San Jose McEnery Convention Center and had thousands of people in line for hours before, Nvidia’s CEO Jen-Hsun Huang, in characteristic jeans, leather jacket, and humble humor, described the world of graphics processing units (GPUs) with brilliant images and memorable one-liners:

Most of Nvidia’s revenue comes from GPUs for gaming, super-capable ray-tracing professional graphics, and extraordinarily powerful super computers for data centers. Most of their current research and development is involved with AI-ready chips that enable clients to develop machine and deep learning models and apps. Nvidia is banking on these new development chips to be the chips of the future.

In AI-focused healthcare, this covers CLARA, a deep learning engine that uses present-day black and white sonogram, PET and MRI 2D scans and enhances the data to 3D and then color rendering. In the example on the right, a black and white ultrasound sonogram on the left is enhanced into the fully rendered baby picture on the right.

In the area of robotics this covers cramming AI, deep learning and real-time control and simulation into chips for autonomous vehicles of all types (cars, trucks, mobile robots).

Finally, in a very convincing demonstration, Huang showed a virtual reality car on the screen. He then showed a very real human near the screen at a control console. Then that very real human placed his virtual avatar behind the wheel and proceeded to remotely drive a very real car outside the convention center around an obstacle and over to a parking lot where he parked it. Very impressive.

Nvidia encouraged 200 startups to participate in a three-segment contest to share $1 million in awards. All received hardware grants, training with deep learning experts, and marketing support. Two finalists were picked from each of three categories: healthcare, enterprise and autonomous systems. Kinema Systems, the Silicon Valley material handling company that can depalletize a mixed case pallet at full speed, won the autonomous systems award and received $333,333.