MODEX 2018: Old and new have never been so far apart 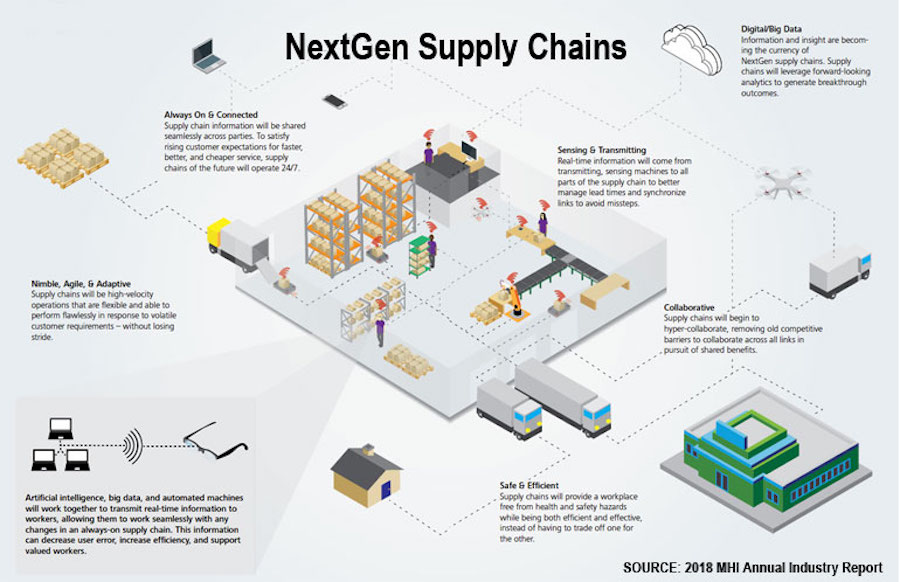 MODEX, ProMat and CeMAT are the biggest global material handling and logistics supply chain tech trade shows. But as I walked the corridors of this year’s MODEX in Atlanta, I was particularly aware of the widening disparity between the old and new.

The 2018 MHI Annual Industry Report found that the 2018 adoption rate for driverless vehicles in material handling was only 10% and the adoption rate for AI was just 5% while the rate for robotics and automation was 35%.

The report indicated the top technologies expected to be a source of either disruption or competitive advantage within the next 3-5 years to be: (shown in order of importance)

The report also listed the key barriers to adoption of driverless vehicles and AI: (shown in order of importance)

Other research reports were more optimistic in their forecasts:

Transforming lifts, tows, carts and AGVs to AMRs and VGVs

Human-operated AGVs, tows, lifts and other warehouse and factory vehicles have been a staple in material movement for decades. Now, with low-cost cameras, sensors and advanced vision systems, they are slowly transitioning to more flexible autonomous mobile robots that can tow, lift and carry. AMRs are Automated Mobile Robots which can be human operated or autonomous or a combination of both.

Navigation systems have changed as well and often don’t require floor grid markings, barcodes or extensive indoor localization and segregation systems such as those used by Kiva Systems (and subsequently Amazon). SLAM and combinations of floor grids, SLAM, path planning, and collision avoidance systems are adding flexibility to swarms of point-to-point mobile robots.

In March 2012, in an effort to make their fulfillment centers as efficient as possible, Amazon acquired Kiva Systems for $775 million and almost immediately took them in-house, leaving a disgruntled set of Kiva customers who couldn’t expand and a larger group of prospective clients who were left with a technological gap and no solutions. I wrote about this gap and about the whole community of new providers that had sprung up to fill the void and were beginning to offer and demonstrate their solutions. Many of those new providers are listed above.

Recently, another set of competitors has emerged in this space:

There are many forms of warehousing. But the area where NextGen tools are needed the most are in high-turn distribution and fulfillment centers.

Consequently flexibility and an ability to handle an ever-increasing number of parcels is paramount and fixed costs for conveyors, elevators and old style AS/RS systems has become anathema to warehouse executives worldwide. Hence the need to invest in NextGen Supply Chain methods as shown at shows like MODEX.

Although 31,000 people went to this year’s MODEX, I wonder how many share my view about the disparity between the old and new shown at the show. Certainly there were enough new tech vendors offering “a mixed fleet of intelligent, collaborative mobile robots and fully-autonomous, zero-infrastructure AGVs designed specifically for safe and flexible material flows in dynamic, human-centric environments.” Yet the emphasis on the show – and the favorable booth space placement – was to the old-line vendors rather than the NextGen companies listed above.