#268: Robotarium: A Robotics Lab Accessible to All, with Magnus Egerstedt

In this episode, Audrow Nash interview Magnus Egerstedt, Professor at the Georgia Institute of Technology, about a way for anyone interested in swarm robotics to test their ideas on hardware, called the Robotarium.  The Robotarium is a 725-square-foot lab at the the Georgia Institute of Technology that houses nearly 100 rolling and flying robots.  To test their ideas, people can write their own programs, upload them to the Robotarium, and then watch the machines carry out their commands. 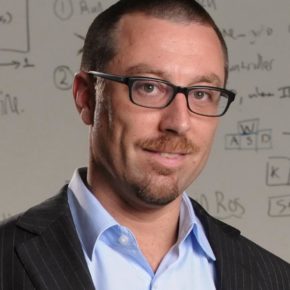 Dr. Magnus Egerstedt is the Steve W. Chaddick School Chair and Professor in the School of Electrical and Computer Engineering at the Georgia Institute of Technology. He holds secondary appointments in the Woodruff School of Mechanical Engineering, the School of Interactive Computing, and the Guggenheim School of Aerospace Engineering, and has previously served as the Executive Director for the Institute for Robotics and Intelligent Machines at Georgia Tech. He received the M.S. degree in Engineering Physics and the Ph.D. degree in Applied Mathematics from the Royal Institute of Technology, Stockholm, Sweden, the B.A. degree in Philosophy from Stockholm University, and was a Postdoctoral Scholar at Harvard University. Dr. Egerstedt conducts research in the areas of control theory and robotics, with particular focus on control and coordination of complex networks, such as multi-robot systems, mobile sensor networks, and cyber-physical systems. Magnus Egerstedt is a Fellow of the IEEE and has received a number of teaching and research awards, including the Ragazzini Award from the American Automatic Control Council, the Outstanding Doctoral Advisor Award and the HKN Outstanding Teacher Award from Georgia Tech, the Alumni of the Year Award from the Royal Institute of Technology, and the CAREER Award from the U.S. National Science Foundation.