What happens to human driven cars in the robocar world? 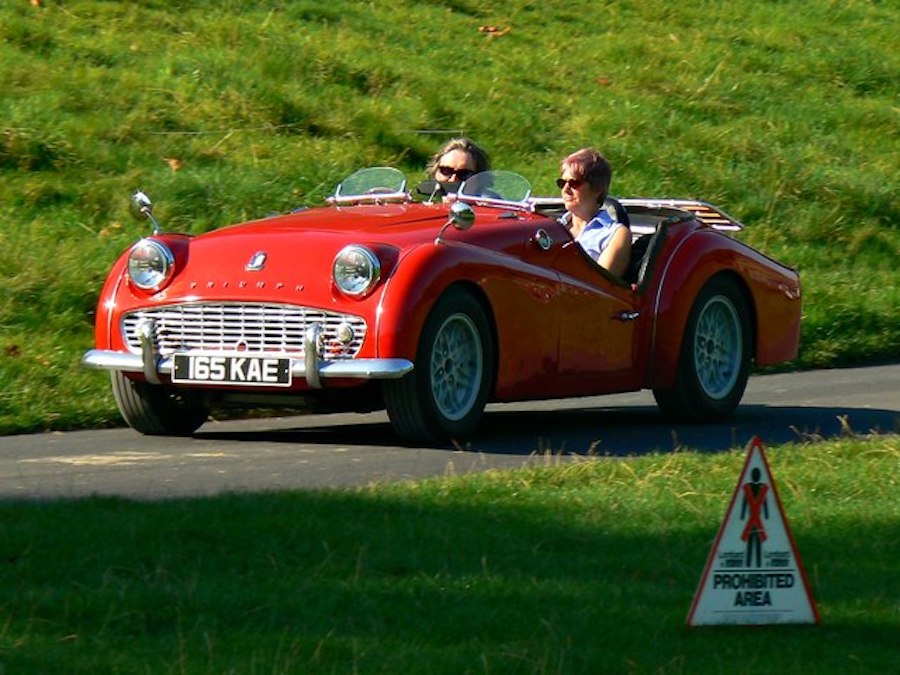 I love to talk about the coming robocar world. Over the next few decades, more and more trips will be made in robocars, and more and more people will reduce or give up car ownership to live the robotaxi life. This won’t be instantaneous, and it will happen in some places decades before it happens in others, but I think it’s coming.

But what of the driver of the regular car? What lies ahead for those who love driving and want to own a traditional car? I often see people declare that nobody will own cars in the future, and that human driving will even be banned. Is that realistic?

Nobody restricts human driving for quite some time

The transition to robocars must be gradual, one car at a time, at least in most of the world. That means lots of human driven cars on all the roads for decades to come.

Some people predict that human driving will quickly be banned. This won’t happen in most places simply because there will still be lots of places robocars don’t go because it’s not commercially viable to certify them there. In addition, there will be strong political opposition. At a rough guess, around 1/3rd of people never have a car accident in their lives. What is the justification in taking away their licences?

When I give talks on robocars, I usually get some people telling me they can’t imagine why anybody would drive or own a car in the future, and others declaring that only a minority will give up the fun, freedom and control of manual driving. The real answer will be a mix. Though to those who tell me that Americans love cars too much to ever give them up, I ask how it is that car-loving Californians can move to Manhattan and give up car ownership in 15 minutes.

We might see the rise of robocar-only lanes in certain places. There might be a special highway lane, where faster driving is allowed, and platooning takes place.

More dramatic would be the designation of certain downtown areas as robocar only at certain times or all the time. It’s not unusual for there to be driving restrictions in downtowns, particularly “old city” downtowns with small streets as found in Europe. Sometimes downtown streets are converted to pedestrian malls as well. It’s possible to imagine the robocars being deemed well behaved enough to go into these restricted areas.

We might also see robocars allowed to access, under certain rules, the private right-of-way used by transit lines, particularly bus rapid transit paths. It’s also possible rail lines and tunnels could get partially paved to allow the robocars to use them when the transit vehicle is not. They can be trusted not to interfere, and they can also drive reliably on thin strips of pavement — like rails for tires — if necessary.

This is not taking anything away from regular cars, but rather it’s giving the robocars a privilege the traditional cars never got.

New infrastructure only for robocars

Many years down the road, cities might realize that when building new infrastructure, there are advantages in making it only for robocars, or for certain classes of robocars, such as lightweight electric single passenger cars. You can build very small tunnels for them, or much cheaper bridges and elevated roadways. They can drive reliably on a thin lane, saving a lot of money. Your old car won’t go there, but then again, it can’t go there now.

It’s also possible we might see housing neighbourhoods that take advantage of some things robocars can do, like serve the homes only with a single lane back alley, which comes with occasional wide spots for cars to do perfectly timed passing of one another on the short lanes.

Like many people, I think that robocars will be electric. As we get more electric cars, they might get privileges on the road you don’t get if you drive a manual gas guzzler. This even includes things like driving into buildings.

The vast majority of the changes due to robocars will be on urban streets and highways. Commuting roads. Even those who love to drive don’t tend to love the urban commute. The country roads, the scenic coastal and mountain routes — these will stay pretty much the same for a long time to come. In fact, you might like having a robocar drive you out of the city to places where it’s fun to drive, and then take the wheel (or switch to a sportscar) to enjoy those great drives.

Robocars must mix with regular cars, but they are able to do a better job at helping reduce traffic congestion by obeying on-the-fly rules about road use. They make use of “virtual infrastructure” — things like maps that show everything about the roads and their rules.

Drivers of regular cars can participate in this as well, with just a smartphone. If the day comes when cities want to meter or charge for roads using computer networks, the robocars will be ready to do it, but so will the ordinary drivers as long as they have that phone.

Parking will dwindle, but get cheaper for robocars

Robotaxis don’t need to park that much — they would rather be out working on another ride. Private robocars will drop their masters off at the door and then go find the cheapest parking nearby. That parking doesn’t have to be right nearby, they will shop around in a way that human drivers can’t. And park themselves densely in valet style. So they won’t pay that much for parking. You’ll probably have to pay more since you need to park your car right where you’re going while they don’t. You also take up more space.

Many parking spaces on the street might be restricted to robocars at certain times. That’s because robocars don’t park, they “stand,” able to move away at any time. A robocar can stand in front of a driveway or even a fire hydrant. And we might see important streets that only let robocars park on them as rush hour approaches, because they can be trusted to reliably clear the parking lanes and make them open for traffic. Robocars can also double park where there is room, because they can get out of the way if the “blocked” car wants to get out.

The existence of cheap delivery robots might change how much people want trucks or vehicles with lots of cargo space. If you know that, when you want to move a big thing, you can easily call up a delivery robot, you might reduce your desire for cargo space. On the other hand, if you want a van with everything in it all the time, you might still go for that.

The price of insurance is based on how frequently people like you have accidents. Unless you think you will have more accidents, your insurance won’t go up. In fact, as the roads get safer and more orderly, you might have fewer accidents. And late model manually driven cars will still be loaded up with new accident prevention features, some of them a result of robocar research. That means your insurance will get a bit cheaper. Of course, the robocars will drive more safely than you, and pay even less for the cost of accidents. If not, they’re doing it wrong.

Some kids never get a licence

Kids are alive today who won’t get a licence due to robocars. That’s easy because kids are alive today who are not getting licences due to transit and Uber. This will grow. As it grows, it will become more normal, which means more effort to accommodate them, and a bit more pressure against human driving in some areas and times. Parents will cut back on the idea of giving a teenager a car, preferring to offer them a “card” which provides robotaxi service. A time will come when preferring to manual drive will be looked on as a touch odd, and for the older generation and the enthusiast.

Still plenty of places without robocars

As I outline in my timeline for deployment, robocars will roll out on very different schedules based on where you are. There will be cities that have heavy robotaxi penetration in the 2020s, while other cities have next to none. There will be countries which have no robocars even in the 2030s.

That’s good news for people who want to give up car ownership and sell their existing car. Even if they might have a hard time selling a used car in a city where car ownership is decreasing, there will still be plenty of places, both in the USA and around the world, where the car can be sold.

In addition, robotaxi service will not be available in rural areas for a very long time. Out there you will find only traditional cars and privately owned robocars. There will be many places to enjoy driving and sell cars.

Conversely, there is talk that countries like China, which have been known to do bold projects and are building brand-new cities, might declare a city to be all-robocars before too long. While that’s possible, it is not going to affect how you drive outside that city.

Privately owned robocars will have a steering wheel available, though if it’s for rare use it may be more like a video game wheel. You’ll need it to drive places robocars are not rated to go, like off-road or the dirt road to grandpa’s house — or just the many places the robocar doesn’t have maps and safety certification for. This probably won’t be “fun” sports driving, but it could be. Taxis won’t have these wheels (except for use by staff if the vehicle fails) but might drop you off next to a vehicle that has a wheel if that’s needed to complete your trip.

Society may not tolerate your mistakes

It’s possible that you might lose your licence after one or two accidents. Perhaps even after just one DUI or a few serious tickets. Today, society doesn’t want to take away people’s licences because that destroys their mobility. In the future, it won’t — you will still be able to get around. So society may not tolerate you making big mistakes.

This also might happen more to people as they get older. Again, today we don’t want to take away a senior’s licence even when they are half-blind, because that ends their mobile life. Not any more.

As time passes, a new generation will grow up without learning how to drive. A couple of generations from now, manual driving may be mostly a sport or affectation. Still allowed, but uncommon. After all, people still ride horses a century after they stopped being used for transportation.

In this far away time, driving may be seen mostly as a sport, not a means of transportation. Racetracks and special roads will still exist, but for fun, not travel.