Engaging the public in robotics: 11 tips from 5,000 robotics events across Europe 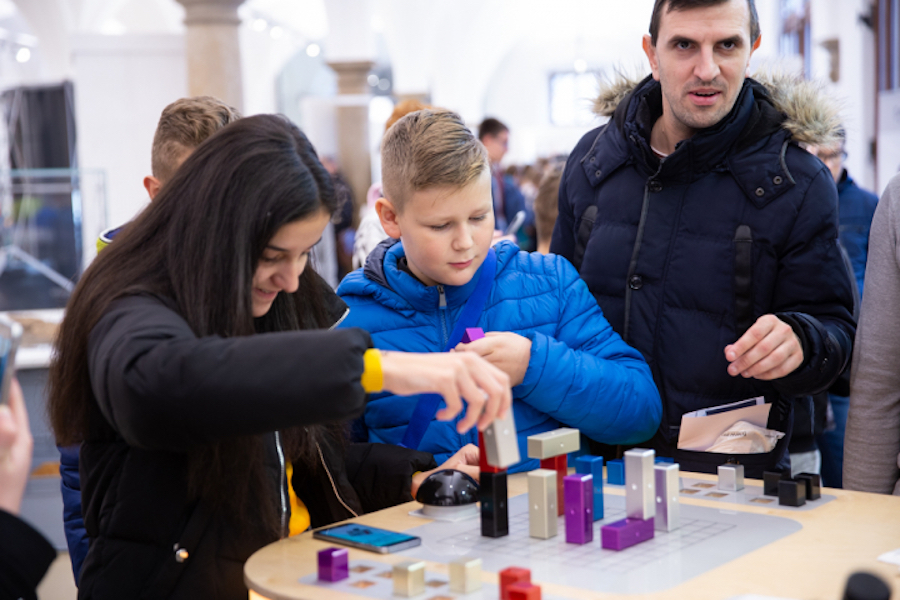 Europe is focussed on making robots that work for the benefit of society. This requires empowering future roboticists and users of all ages and backgrounds. In its 9th edition, the European Robotics Week (#ERW2019) is expected to host more than 1000 events across Europe. Over the years, and over 5,000 events, the organisers have learned a thing or two about reaching the public, and ultimately making the robots people want.

For many, robots are only seen in the media or science fiction. The robotics community promises ubiquitous robots, yet most people don’t encounter robots in their work or daily lives. This matters. The Eurobarometer 2017 survey of attitudes towards the impact of digitisation found that the more familiar people are with robots, the more positive they are about the technology. A recent workshop for ERW organisers highlighted the “importance of being able to touch, feel, see and enjoy the presence of robots in order to remove the ‘fear factor’ and improve the image of robots.” People need to interact with real robots to understand their potential, and limitations.

Most robotics events happen where roboticists and their robots already are, in universities and industry. This works well for those who show interest in the field, and have the means to attend. To reach a broader audience, robots need to be brought to public places, such as city centres, or shopping malls. ERW organisers said “don’t expect ordinary people to come to universities.” In Ghent Belgium for example, space was found in the city library to give visitors an opportunity to interact with robots. More recently, the Smart Cities Robotics (SciRoc) challenge held an international robot competition in a shopping mall in the UK.

Robots have a role to play in tackling today’s most pressing challenges, whether it’s the environment, healthcare, assistive living, or education. Robots can also improve efficiencies in industry and avoid 4D (dangerous, dirty, difficult, drudgerous) jobs. This is not often explicitly highlighted, with robots presented for the sake of it as fun gadgets, instead of useful tools. By positioning robots as the helpers of tomorrow, we empower users to imagine their applications, and roboticists receive meaningful feedback on their use. Such applications may also be more exciting for a broader diversity of people.

The ‘Blue-Eyed Dragon’ Robot by Biljana Vicković (with the University of Belgrade, Mihajlo Institute, Robotics Laboratory Belgrade, Serbia) for example introduced an innovative and socially useful robotic artwork into a public space with a tin recycling function. It integrates robotics into an artwork with a demonstrable ecological, social and cultural impact. “The essence of this innovative work of art is that it enables the public to interact with it. As such people are direct participants and not merely an audience. In this way contemplation is replaced by action.” says its creator.

Tell stories about people who work with robots

Useful robots will ultimately be embedded in society, our work, our lives. Their role is often presented from the developers’s or industry’s perspective. This leaves the public with the sense that robots are being “done to them”, rather than with them. By bringing the users in the discussion, we hear stories of how they use the technology, what their hopes and concerns are, and ultimately design better robots and inspire future users to make use of robots themselves.

Bring a diversity of people together

Making robots requires a large range of backgrounds, from social sciences, law, and business, to hardware and software engineering. Domain expertise, will also be key. Assistive robots will require input from nurse carers for example. Engaging with a diverse population of makers and users will help ensure the technology is developed for everyone. The ERW2019 central event in Poznan features a panel dedicated to women in digital and robotics.
Carmela Sánchez from Hisparob in Spain says “this year, our motto for ERW is Robotic Thinking and Inclusion. We focus on how robotics and computational thinking can help inclusion: inclusion of different abilities, social, and economic backgrounds, and genders.”

Inflated expectations about robotics may lead to disappointment when robots are deployed, or may lead to unfounded fears about their use. A recent ERW organiser commented “Robots are not prevalent or visible in society at large and so prevailing perceptions about robots are largely shaped by media presentation, which too often resort to negative stereotypes.” It’s worth noting robots are typically made for a single task, and many do not look like a humanoid robot. With this lens, robots no longer seem too difficult to engineer, and are far from science fiction depictions. This could be empowering for those who would like to become roboticist, and could help users imagine robots that would be helpful to them. The Smart CIties Robotics challenge for example showed the crowds how robots could help them take a lift, or deliver emergency medicine in a mall.

By teaching teachers to teach robotics, we can reach many more students than what is possible through all the European Robotics Week combined. Lia Garcia, founder of Logix5 and a national coordinator of ERW in Spain underscored the need to engage the education sector: “We have to work with teachers. We need to get robotics onto the school curriculum, onto the teaching college curriculum and to get to teachers who teach teachers.” Workshops that teach educators, and help spread the word among local teachers are essential. As an added encouragement, they could receive CPD (continuing professional development) credits for taking part in robotics workshops. The ERW2019 central event in Poznan features a workshop dedicated to robotics education in Europe on 15 November.

Competitions are an important way of bringing students into robotics. It’s fun, and exciting, and shows they can build something that works in the real world. Europe now hosts several large robotics competitions including the European Robotics League (Emergency, Consumer, Professional, and Smart Cities). While these competitions are tailored to university students, others are run for kids. The ERW event page already has over 100 robot competitions and challenges listed for this year. Fiorella Operto from Scuola di Robotica has coordinated more than 100 teams from all over Italy committed to using a humanoid robot to promote the Italian Cultural Heritage. The 2020 edition of the NAO Challenge is devoted to “Arts&Cultures”, asking robotics to improve the knowledge of and to promote beautiful Italian art.

More than ever, we have a broad range of tools to engage with the public. It could be as simple as drawing pictures of robots, to developing robot-themes escape rooms, or engaging on social media including youtube, twitter, instagram and tiktok. Robots are fun, which is why they are such good tools in education. Be creative with demos and activities. Make robots dance, allow people to decorate them, play games. University of Bristol for example will be running a swarm-themed escape room called Swarm Escape!.

Events with the public are a good opportunity to engage with stakeholders, including government, industry, and users. This is important as stakeholders will ultimately be the ones making robots a reality. Having them participate in such events helps them understand the potential, invest in technology and skills, and shape policy. It could also provide funding for some of the more ambitious events. “For the first time since 2012, Robotics Place, the cluster of Occitanie, organizes a one day meeting with its members on November 20th in Toulouse. Robotics Place members will meet with press, politics, students, partners and professional customers.” says Philippe Roussel, a local coordinator for France.

Events are present across Europe, organised regionally for the local community. Connecting these events at a European scale increases impact, raise awareness, builds momentum, and allows for lessons to be shared across the content. euRobotics and Digital Innovation Hubs provide valuable resources for these purposes.

Yet there is a divide in access, with cities being better catered to than rural communities, or areas that are poorer. The challenge is to provide everyone with access and exposure to robotics and its opportunities. Extra effort should be made to reach out to underserved communities, for example using a “robot roadshow”. Organisers of ERW said “a further benefit of this cross-border approach would be to enhance the European dimension.” As an example, from May 2020, a 105m long floating Science Center called the MS Experimenta will be touring southern Germany, bringing science from port to port.

Feeling inspired, ready to make a difference? Organise your own European Robotics Week event, big or small, and register it here along with the over 900 events already announced.